Australian biscuits are many and varied much the same as anywhere else really, we do have our favourites and those that have become well known and identifiable as Australian.

When I was a kid living in the bush I can remember waiting for the delivery truck to come and drop off supplies.

But of course as time went on the range changed and we got the cream varieties and the chocolate ones too like Tim Tam's and then there was the Iced VoVo's and, of course, let's not forget the SAO's, Mum would put a little butter and vegemite on them for us and we'd all sit there smacking our lips while we ate them. 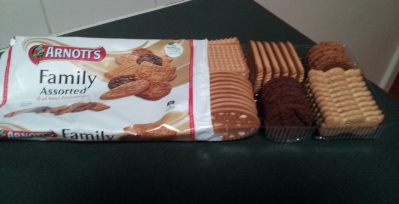 Thank You Arnott's Biscuits from all the bush kids!

The other Australian biscuits that are a part our land are ANZAC biscuits, then there's Hardtack (ANZAC wafer or ANZAC tile), Damper Bread and Pumkin Scones so we thought we'd go into a bit more detail about those. 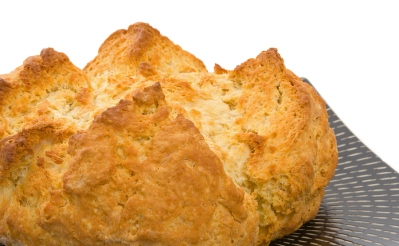 While it is not an Australian biscuit Damper bread is a traditional bread loaf dating back to early white settlement in Australia so we thought we would include it here.

Whilst Damper is referred to as bread, this is not really correct as bread has yeast and the damper is made without yeast so let's just call it bread without yeast!

Flour was a staple diet for our first white settlers and as such it was a very important food in the beginning of the life in the colony.

The Damper is based on the Irish Soda Bread, which is not surprising due to the fact that many of the first convicts were Irish. Damper bread was, as most things in the beginning were, a very simple recipe, flour and water with salt to taste. This mixture was made into dough and placed directly on to hot coals or an open fire.

The name Damper comes from being cooked over a fire which has been "damped down".

As the colony developed and more towns and villages sprang up, caste iron camp ovens were the way damper was cooked.

I remember as a child growing up in the outback we'd go on droving trips and at night we'd gather around the camp fire and the cook would produce a damper out of the camp oven and the smell of that freshly cooked loaf was something that made you want to wolf it down. Smothered in either dripping or butter with a piece of nice juicy steak on it, it was just yummy.

It was very much a food of the Australian outback when I grew up there and still today it is something worthwhile cooking and tasting.

As mentioned before the original damper had flour, water and salt in it but there are now many different recipes of the humble Damper, from the original to ones that even put fruit, milk and butter in it. It is endless what gourmet delights you can do with our first bread. Just use your imagination!

Get the recipe from our Australian Recipes page. 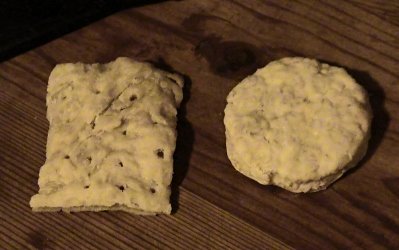 Hardtack biscuits have long been part of warfare as a staple diet for troops, the history of them dates back to Egyptian times, to Richard 1 Crusades and recently the two World Wars.

They have had varying names over the many centuries such as 'Ship's Biscuits' and 'Sea Biscuits' but they are basically all the same and are made using very few ingredients such as water, flour and salt.

Once baked they become as hard as a rock and are sometimes referred to as "molar breakers", a lot of men would grind it up and make a porridge type substance to even eat it. It contained the protein, vitamins and calories which sustained the fighting men.

Hardtack would last for many years if kept dry, however it is subject to such things as going mouldy or becoming a haven for weevils.

The Australian Defence Force called their hardtack biscuits ANZAC Wafers or ANZAC Tiles, but they were pretty much the old tried and true recipe used for centuries as troop food.

This troop dietary delight was the basis for the mothers, wives, girlfriends and sisters of the troops back in Australia during World War 1 to put their thinking caps on and produce our all-time favourite of Australian biscuits 'The ANZAC Biscuit'. 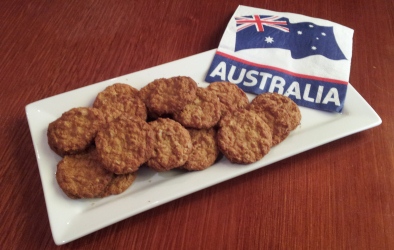 The ANZAC Biscuit is a true Australian biscuit icon and had its humble beginnings when as mentioned a group of women banded together to produce a product which would show their fighting men overseas, their love and care by sending something sweet and nourishing with the food and comfort packages that were despatched from Australia.

Now it had to be something that would last and would not spoil on the long journey over months of travel before finally reaching the destination and the men.

The ingredients that were used to make these, now famous, biscuits were, rolled oats, coconut, butter, golden syrup and bicarbonate of soda. These were mixed together with water and baked in an oven on biscuit trays.

The final biscuit was put in tea tins to keep them air tight. They were then sent to our troops and imagine the joy of the sweetness and goodness of those first biscuits being enjoyed by the men.

ANZAC biscuits are a proud tradition for Australia and for our New Zealander neighbours who are very much part of the great ANZAC Legend.

There are now variations to the original Australian biscuit recipe but if you wish to bake and try out the first one, the one that was used to ship off that first lot of nourishing biscuits, just go to the Australian War Memorial site.

Or you can get them both from our Australian Recipes page. 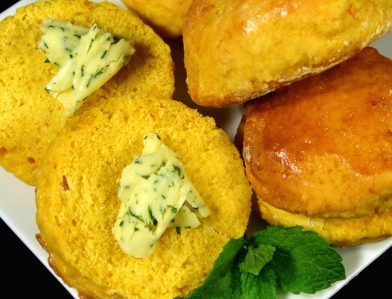 Pumpkin Scones are obviously not an Australian biscuit but definitely a favourite of ours and many other Aussie's too so they had to be part of this page.

The original scone was flat and round and the size of a bread and butter plate.

History suggests that they originated in Scotland; it was baked on a griddle and cut into eating sizes, to be served to the family.

Pumpkin scones, (one of my favourites) became very popular in Australia as a must have with a cuppa. They were made very famous by the wife of one of our longest serving Premiers of Queensland, Lady Flo Bjelke-Petersen.

Lady Flo, was famous for greeting visiting journalists and dignitaries with a cuppa and a batch of freshly baked pumpkin scones. Just a little side comment and for a bit of a giggle she even wrote a book titled 'Politics and Pumpkin Scones'.

We eat more pumpkin scones than any other country and we tend to think of them as part of who we are.

Whilst we never really created the scone, we certainly can sort of lay claim to the popularity of the pumpkin scone as an Aussie Icon.

Like our ANZAC Biscuits and our Damper there are many and varied recipes that are available today, but the original is still wonderful and started the proud history of the humble pumpkin scone and remains one of our favourite things to eat.

You can get a great Pumpkin Scone recipe from our Australian Recipes page too.

Give them a go for yourself and we hope you enjoy all our Australian biscuits, Damper and scones just like we do.

Go On To The Australian Recipes page