A concise and down to earth Aussie view on our Australian States and Territories.

You can get all the information you need by watching the videos on every state and territory too.

We've moved around a lot in our lives and lived in a lot Australian States, kind of like that old song; "I've been everywhere man".

And when you move around you notice little differences, not only in the landscapes and the people but in other ways too.

I think there's a bit of larrikin in all of us, of course, and there's certain things that all Aussie's just know; like you can call Wagga Wagga (a city in New South Wales) Wagga but you can't call Woy Woy (a town in New South Wales) just Woy, because that would sound stupid!

You notice little differences in the way things are done and the names for certain things too; for instance in South Australia you call a roll of luncheon meat (sort of like boloney) Fritz, in Queensland it's just called Luncheon and in Victoria it's Devon.

There are also differences in the way people speak as well as the rivalries between certain states; like the rivalry between South Oz and Victoria over the Aussie Rules Footy, our beers and the Grand Prix (South Australians still think they stole it!)

The huge competiveness between the New South Wales Blues and the Queensland Maroons when the State of Origin Rugby League time of year comes around and we all dress up in our colours and cheer on our team (Go the Maroons!)

We all love the cricket, of course, and take great delight in beating the Poms (the English) in the Ashes Series; all uniting under a sea of Green and Gold mateship to watch our team bring the Ashes Urn home for us (of course the Poms try and stop us and sometimes they do!)

Everything you need is in our info packed videos on all the Australian States and Mainland Territories; just click on the links below. 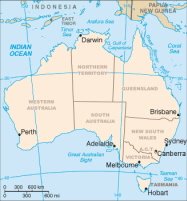 New South Wales The original site of European settlement and home to the most spectacular Harbour in the world (the sight of that beautiful Harbour still takes my breath away whenever I fly into Sydney), the amazing Sydney Harbour Bridge and the World Famous Sydney Opera House.

New South Wales is the 5th state or territory in area at around 800,620 square kilometres, located in the southeast of the Australian mainland, it is bordered by Victoria to the south, Queensland to the north, South Australia to the west and the Pacific Ocean/Tasman Sea to the east.

Victoria Birthplace of Aussie Icon Ned Kelly (they hung him there too!) and home of the beautiful garden city of Melbourne and the first seat of Australian Parliament.

Victoria is the 6th state or territory in area at around 227,000 square kilometres, located in the southeast of the Australian mainland, it is bordered by New South Wales to the north, South Australia to the west and by the Indian Ocean, Bass Strait and the Tasman Sea to the south.

Queensland "Beautiful One Day, Perfect The Next" The slogan that says it all, and home to the spectacular Great Barrier Reef, Daintree Rainforest and the Holiday Playground of Australia, The Gold Coast.

Queensland is the 2nd state or territory in area at around 1,724,000 square kilometres, located in the northeast corner of the Australian mainland, it is bordered by the Northern Territory to the west, by South Australia to the south west, by New South Wales to the south and by the Coral Sea and the Pacific Ocean to the east.

South Australia The "Only Free Settled of the Australian States" (no convicts sent here mate!) and home of the world famous wine regions, Adelaide Festival, the Fringe, WOMADelaide and the Tour Down Under.

South Australia is the 4th state or territory in area at around 978,810 square kilometres, located in the south central part of the Australian mainland, it is bordered by the Northern Territory to the north, by Queensland to the northeast, by Western Australia to the west, by New South Wales and Victoria to the east, by the Great Australian Bight and the Indian Ocean to the south.

Western Australia The only Australian State that was not a part of the Colony of New South Wales at some point; home to big blue skies, the unspoilt wilderness of the Kimberly's with its deep red gorges and the longest straight stretch of railway line in the world.

Western Australia is the 1st(largest)Australian state or territory in area at around 2,526,786 square kilometres, located in the western part of the Australian continent and covering a third of the mainland, it is bordered by South Australia and the Northern Territory to the east and by the Indian Ocean to the north, west and south.

Tasmania The only State not located on the Aussie Mainland, originally known on as Van Diemens Land (and they were really big on housing convicts back in the day) Home of diverse landscapes and astounding scenery of glacial mountains, cascading waterfalls, dense forests, rolling green hills and pristine wild beauty make Tassie a favourite destination for nature lovers.

Tasmania is the 7th state or territory in area at around 64,500 square kilometres, located off the southeastern corner of the Australian mainland approximately 240 kilometres south of Victoria and separated by Bass Strait. The Indian Ocean lies to the west and the Tasman Sea to the east.


The Australian Capital Territory One of Oz's Mainland Territories; created to house our Federal Parliament because of the rivalry that existed between Sydney (the first city) and Melbourne (the first seat of Parliament) competitive even back then! Home of our National Museum, War Memorial and National Gallery.

The Australian Capital Territory is the 8th (smallest) Australian state or territory in area at around 2,350 square kilometres, located within the state of New South Wales.

The Northern Territory Australia's Top End, where you experience the spirit of the Aussie Outback; home to some of the most spectacular, diverse and contrasting environments in our big brown land including Kakadu and Uluru.

Northern Territory is the 3rd state or territory in area at around 1,335,742 square kilometres, located in the central north of the Australian mainland, It is bordered by Western Australia to the west, by South Australia to the south, by Queensland to the east and by the Timor Sea, the Arafura Sea and the Gulf of Carpentaria to the north.