New South Wales was home for the first 12 years of my life. Our Dad was a boundary rider so we lived on the Dingo Fence.

I lived in the beautiful city of Sydney for a few months when I was about 21 and I had a ball.

Sydney is an awesome city and I love the whole feeling of it. The Harbour is absolutely spectacular and whenever I fly into Sydney that sight still thrills me, even after so many times.

Why not watch our video too? it's packed full of information, everything from the population, the slogan the state motto to the Animal, Bird and Floral Emblems and much more. 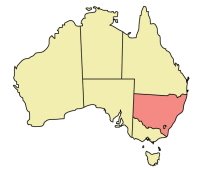 The capital of NSW is Sydney.

New South Wales is the first of the Australian states, and was settled in 1788. The First Fleet of 11 ships and around 1,350 people arrived at Botany Bay around the 18th to the 20th of January 1788. However, Captain Arthur Phillip decided that Botany Bay was not suitable for settlement so he moved them north to Port Jackson where they landed on the 26th of January (now Australia Day).

The NSW colony once included Tasmania, South Australia, Victoria, Queensland, the Northern Territory, and New Zealand, but they were separated and made colonies in their own right between 1825 and 1863. The only state or territory of Australia to not be a part of the colony of New South Wales at some point was Western Australia.

NSW is the most populated Australian State with about 6,549,000 people living there, more than half of these live in the Sydney metropolitan area.

Our elder brother, Maurice lives in a town called Cobar, which is in Central NSW, he works for the Cobar City Council. We see Maurice more regularly than our other brothers as we live closer (by Australian standards-only 960 kilometres) to him.

NSW is politically and economically the most powerful Australian state, accounting for around 35% of the total national gross domestic product, with the Sydney, Newcastle and Wollongong areas being Australia's greatest industrial region.

Sydney is the Capital of NSW and the largest city in Australia. The city is built around Port Jackson, which includes Sydney Harbour. It is the largest financial centre in Australia, and it is, of course, one of the top tourist destinations. Sydney has the most recognisable and most beautiful harbour in the world, and the Sydney Opera House is famous for its spectacular white sails and its amazing acoustics.

Sydney is also home to beautiful Bondi Beach, Australia's most famous beach and an Aussie icon.

If you go to Sydney there are at least three places we think you have to visit, the Sydney Opera House, the Sydney Harbour Bridge and of course Bondi Beach.

If you would like to know more about Australia's famous Bondi Beach check out Bondi Beach Australia. A great site for information, activities, events and much more to do with Bondi.

NSW is a diverse state with Australia's highest mountain, Mount Kosciuszko, Bathurst, the oldest inland town in Australia, the black opal area of Lightning Ridge, the scenic views of the beautiful Blue Mountains region, the Country Music Festival city of Tamworth, the amazing Dubbo zoo, the red sand hills of the outback corner country, the sparkling beaches that stretch from north to south and, of course, the beautiful harbour city of Sydney, all of this and more makes New South Wales a popular tourist destination.

The main football code in New South Wales has always been Rugby League but in the past few years they have been getting into Aussie Rules more and more.

A person from NSW is called a New South Welshman.

The colloquial term for a New South Welshman is a cockroach; The name comes from the rivalry between the Rugby League Teams in the State of Origin, The Blues (NSW team) are called Cockroaches and The Maroons (Qld team) are called Cane Toads.

The State Flag of NSW has been in use since 1876. It shows the Union Jack and the NSW badge.

The NSW motto is "Newly risen, how brightly you shine"

Slogan for NSW: First State, The Premier State or Towards 2000 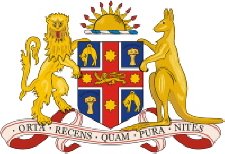 Go to next state: Victoria