The Waratah is the Floral Emblem of New South Wales.

The genus (category) Telopea is a species of small trees or large shrubs in the Proteaceae plant family, which are native to southeastern Australia.

The Proteaceae plant family are chiefly Australian and southern African and includes the Grevillea and the Banksia.

Found in New South Wales on the Central Coast the South Coast and nearby ranges.

This magnificent plant grows mainly in the shrub in open forests. 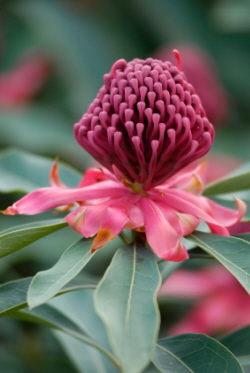 An erect shrub which can grow to 4 metres, with dark green leathery leaves from 13 to 25 cm in length.

The beautiful flowers are actually individual flowers grouped in rounded heads from 7 to 10 cm in diameter that usually grow red but can be pink or even white.

Flowering time is normally from September to November.

They can be grown in gardens but need to be in lightly shaded sunny positions and they need to be watered well and regularly.

Waratah is the aboriginal name and was the name used by the early settlers.

They are protected and no part of the plant should be picked or collected.

More information about the spectacular New South Wales Floral Emblem can be found at this Australian Government page.