The Laughing Kookaburra is the New South Wales Bird Emblem. 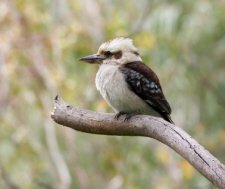 Australian Kookaburras are from the Kingfisher family and are the largest Kingfisher in the world.

They measure about 40 to 45 centimetres and are white or cream on their body and head with a dark brown stripe through each eye, the wings and back are brown with blue spots on the wings, they have a large head, a short neck, and a medium length tail.

Their name comes from their most famous feature the loud, boisterous "laugh", which is often heard at dawn in the bush.

They are sometimes called the Laughing Jackass.

They are a carnivorous bird that eats fish, snakes, lizards, rodents, worms and insects.

Larger things like lizards and snakes are bashed against something like a tree or a rock to kill them and to soften them up before the bird eats them. 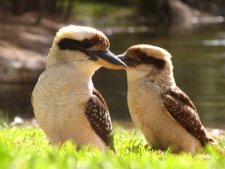 Breeding time is from August to January.

They usually lay one to five eggs. Both female and male sit on the eggs for 25 to 29 days, then the parents and elder siblings all care for the young.

Most Kookaburras live in family units and mate for life.

Kookaburras live in the one place for most of their lives.

They are found throughout eastern Australia and have been introduced to other parts of the continent including Tasmania where they live in forests, open woodlands, and on the edges of plains.