The Northern Territory of Australia is an amazing place with some of the most spectacular natural environments in the country.

I first travelled there when I was a teenager and I've been back a couple of times, unfortunately I haven't gotten up as far as Darwin yet but I do intend to go there in the near future.

There are some parts of the NT that, quite simply, take your breath away and make you realise the spirit we have in this big brown land of ours.

The outback of Australia has always been close to my heart and places like Uluru-Kata Tjuta National Park are what makes the NT such an amazing place to visit and to feel the spirit of the outback.

Our video on The Territory is packed full of all the information you need on Australia's top end. 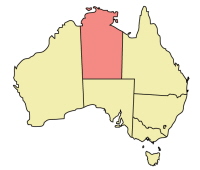 The Capital of the NT is Darwin.

The Northern Territory, as the name suggests, is not one of the Australian states but an Australian territory and, of course, I have included it here.

The NT was part of the Australian state of New South Wales from 1825 to 1863, then part of South Australia from 1863 until 1911, when it was separated from South Australia and transferred to Commonwealth control.

The British finally established a settlement at Port Darwin in 1869 after many previous attempts at settling the coastal regions had failed.

Northern Territory is the 8th (or least) populated of the Australian states or territories with about 215,000 people living there, with over half of these living in Darwin. About 30% of the people living in the NT are Indigenous Australians, the NT is home to the largest population of Aboriginal people in Australia.

There is only one other city or town of any significant size in the NT, this is Alice Springs with about 26,486 people.

The economy of the NT relies mainly on mining and tourism. The main mining operations are bauxite, manganese and uranium.

Darwin is the Capital and the least populated of the Australian capital cities, situated in the northwest corner of the NT on the coast of the Timor Sea.

The NT is blessed with some of the most spectacular, diverse and contrasting environments in Australia, from the natural wonders of Kakadu National Park, Nitmulik (Katherine Gorge) and Uluru-Kata Tjuta National Park, just to name a few, to the deserts of central Australia and the tropical top end and Darwin, NT has a lot to offer.

The main code of football played in NT is Aussie Rules.

A person from the NT is call a Territorian.

The colloquial term for a Territorian is a top ender; because they are from the top end of Australia.

All State flags, except the NT and ACT, use the Australian flag, with the State badge on the right hand side.

Until 1978 the NT used the National Flag and Coat of Arms.

the current NT Flag was first flown in 1978. It shows the Southern Cross in white on a black background and Sturt's desert rose in white and black on a red ochre background. Black, white and ochre are the main colours of Aboriginal art.

Queen Elizabeth II granted the Coat of Arms in 1978.

The NT has no motto.

Slogan for NT: Outback Australia or The Top End

Thank you to Tourism NT for the use of their images on the Northern Territory video. 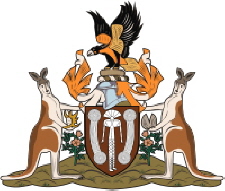 Discover the Climate of Australia