The Wedge Tailed Eagle is the Northern Territory Bird Emblem. 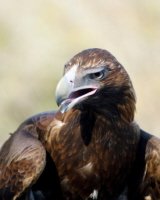 The largest bird of prey in Australia and one of the largest in the world.

They have long, broad wings, their legs are fully feathered, and they have an unmistakable wedge-shaped tail, and as with many birds of prey, the female is larger than the male, the female averages about 4.5kg, while males are about 3.5kg.

The wingspan of a Wedge Tailed Eagle is between 1.8 and 2.5 metres.

When they are young they are a mid brown colour with lighter, red brown wings and head. As they grow older, they gradually become darker, and after about ten years they reach a dark black-brown.

The majority of a their diet is made up of rabbits, wallabies and small kangaroos, although they will eat lizards, snakes, foxes, feral cats and other small animals.

They are very adaptable, and have been known to team up to drive flocks of sheep or kangaroos to separate a weaker animal, and to hunt animals as large as the red kangaroo.

Growing up around Tibooburra and Cameron's corner we saw a lot of them.

As kids, our father would let us climb the trees to look at their nests and to check out the chicks, obviously we had to keep an eye out for the parents as they would not have been happy to see us around their babies.

Although we were allowed to look at the nests and the chicks, our father was very particular about us not disturbing or touching the nest or the chicks.

One of the most amazing sights was the Wedge-tails cleaning up the carcasses of the dead animals after a long drought. 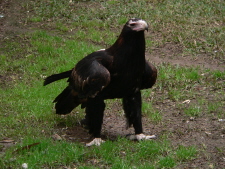 You often see them by the roadside in the Australian outback, feeding on animals that have been hit and killed by vehicles, and up to 40 can be found feeding on the one carcass.

Adults keep the same mate for life. They perch close to each other and preen each other as the breeding season approaches.

They also perform impressive aerobatic flights together. They soar for hours without any effort or without having to beat their wings.

Breeding time is between April and September, both birds build the large stick nest.

The female usually lays two eggs,and both the female and the male incubate them. After about 45 days, the chicks hatch.

When the chicks are around 30 days old, the female can leave them in the nest and join the male to hunt for food.

The chicks are dependent on their parents for up to six months.

They are found throughout Australia including Tasmania as well as in Southern New Guinea.

The Wedge Tail is a protected species.