There are many different Australian Lizards including the Monitor or Goanna, the Frilled and Skinks and Geckos.

There are representatives of five families in Australia. In fact there are more Lizards in Australia than anywhere else in the world.

Growing up in New South Wales, we saw plenty of them including Goannas, Geckos and Skinks.

Once our Father chased a big Goanna to try and get it out of our house and it went for the highest spot, which at the time just happened to be on our Mothers head. As Mum was a city girl she freaked out and screamed her head off untill Dad could get it off her head and out the door, and, of course, the story became somewhat of a family legend and the source of many laughs from then on.

The Monitor or Goanna is a predatory Australian Lizard, Goannas are often fairly large with sharp teeth and claws. 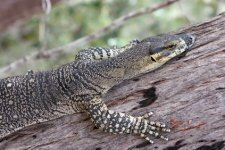 The largest is the Perentie, which can grow to over 2 metres in length.

Goannas are found throughout most of Australia, except for Tasmania.

They will normally run away if they come into contact with humans and a they are fairly fast movers, they can run short distances on their back legs.

They will rear up when their threatened, they puff out the flaps of skin around their throats and let out a loud hissing noise.

They lay eggs like most Lizards usually in a nest or a burrow.

Unlike most other Lizards, the Goannas cannot regrow tails or limbs.

The Frilled or Frill-necked Lizard, got it's name because of the large frill of skin which is usually folded back against its head and neck.

When the Frilled Lizard is frightened it opens its mouth and flares out the frill.

Also when they're frightened they start to run on all four legs, then they speed up onto only their back legs.

Frilled Lizards can grow up to one metre in length. Male Frill-necks are considerably larger than females.

One of the most common Australian Lizards where we lived was a member of the Skink family called the Blue Tongue or Sleepy Lizard.

We loved them when we were kids because they moved so slowly they were easy to catch and that meant we could check them out, we had to let them go after awhile though because our Dad didn't think it was good to keep them.

The Blue Tongues occur over a range of habitats from deserts to woodlands and from suburban areas right through to tropical regions.

They are carrion eaters that also eat insects, spiders, snails, slugs and other small animals. They also eat plants.

When Blue Tongues are trying to scare away something they see as a threat they open their mouth wide and stick out their tongue. 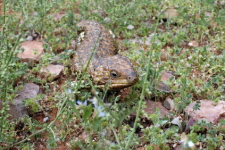 The Sleepy can latch onto you if you're not careful, as one of our brothers found out when he picked one up, and they have strong jaws so it sn't easy to get them to let go once they're latched on.

Blue Tongues can grow up to 60 cm (depending on the species).

If you would like to know more about Australian Lizards we suggest you visit the Australia Zoo or the National Parks and Wildlife service.

Go to next animal page: The Numbat