There are a lot of feral camels in Australia. They were originally imported in the mid 1800's to provide transport but now Australia has the largest population of feral Camels in the world.

Although they don't appear to be as destructive as other introduced species because they eat trees and plants that our native Australian animals don't eat, they are minor pests and in the last few years the Australian Camel population has been increasing at a fairly alarming rate and becoming a bit of a problem.

We didn't see them that often where we grew up unless we went further into Queensland or South Australia. When we did see them it was always a bit of a thrill for us kids because it was somewhat of a novelty.

The suggestion of bringing Camels to Australia was first made in 1837, 49 years after Europeans arrived in Australia.

The importing of Camels into Australia began in the mid 1800s to open up the desert areas of central and Western Australia.

They were handled and cared for by Muslim cameleers that came from countries like Egypt, Turkey and northern India.

The cameleers were called Afghans or "Ghans." even though most of them were not Afghans. The name stuck to a part of the railroad track that links Port Augusta in South Australia to Darwin in the Northern Territory.

In a famous 176-kilometre race, between Bourke and Wanaaring in New South Wales a Camel was beaten by a horse but the horse died the next day while the Camel was ridden back to the starting point.

By the 1920s there was estimated to be about 20,000 domesticated Camels in Australia, but with the arrival of motor and rail transport in the 1930's people no longer needed their camels and a lot of them were abandoned in the bush. 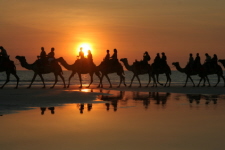 Australian Camels are now exported live to Saudi Arabia, the United Arab Emirates and other countries where disease free Camels are considered a delicacy.

The United States also impots them to use in tourist venues.

There are over 40 Farms providing rides and Safari Treks operating in Australia now.

Go to next animal page: Cane Toads in Australia

Return from Camels in Australia to Australian-Information-Stories home page