'Give Us Our Daily Bread'
A Funny Family Story

This is a funny family story about our Mother and her first attempt at making her own bread when she moved to the Australian outback.

Although this first attempt was a bit of a disaster she was never one to give up and she eventually mastered the art of bread making, but the telling of this funny family story lasted longer than she had hoped.

Our Mother was born and grew up around the coastal area of NSW and was very used to the normal every day things; like the milk got delivered, she could pop down the baker and pick up a loaf of bread, the butcher, the green grocer and the corner store held every convenience that was needed for a normal existence.

Mother was totally unprepared for life in the outback and some of the things that occurred made for some funny family stories.

There was no baker around the corner so she had to learn how to make and bake bread. This was not easy, as she had never done it before. She wanted to surprise Dad with her baking skills so she read and re-read the recipe on how to mix the yeast and knead the dough and how she had to wait the allotted time for the bread to rise before putting it in the oven.

The wood stove, was not very accurate, temperature wise, so once you put the wood in you just hoped the temperature was correct for any baking that needed to be done.

I think you have probably guessed this whole bread baking experiment was doomed to have something go wrong. 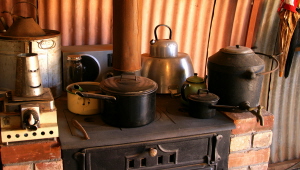 Dad, planning to be gone most of the day, headed off up the border fence to check the fence line and look at the dog traps, which he would set to catch the dingoes.

Mother completed everything according to the instructions from the recipe; the final kneading was done, the bread was put aside covered by clean tea towels waiting to rise.

Mother, having waited the time suggested, lifted the tea towels and there sat the loaves of bread as flat and as hard as rocks. The dough had not risen one bit. Mother kneaded it again but to no avail.

Mother then did the only thing a wife could possibly do, she hid the evidence. There was no way Dad was going to find out about her failure. She kneaded the dough into a big ball and then dug a hole in the front garden (which was not easy as it hadn't rained for months) and she buried the dough like a corpse.

She quickly made a damper (which she had mastered the skill to do) for dinner and having hid the failed bread making evidence in the front yard thought her secret was safe. 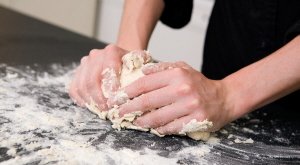 By the time Dad arrived everything on the home front was great.

Dad commented that storm clouds were gathering and it could just rain, which was unusual for the bush.

We all went to bed listening to the raindrops on the tin roof and slept like lambs.

Dad, being an early riser, wandered out to the front yard to see how much rain we had been blessed with. He was met with an incredible sight. There in the front yard was this great big mound of dough rising above the soil like a bloody huge mushroom!

He knew straight away what had happened and I guess was almost wetting himself with laughter, he yelled at Mother "Hey Stella, quick, quick come and have a look at this bloody great mushroom!"

The moisture from the rain and the warmth of the earth had made the yeast react and do what it wouldn't do in the kitchen for Mother; the dough had risen.

You can imagine Mother was mortified and she never lived that one down. Mind you she handled it okay whenever this funny family story was told; she liked a funny story as much as the next person.

She did become a very good bread maker and we, as kids would wait for the hot bread to come out of the oven and wolf it down with great glee but we still get a kick out of this funny family story whenever we get together!

Read about Malcolm with this: Short and Funny Story