The Golden Wattle is the Australian Floral Emblem.

It is a popular garden plant because of the bright beautiful flowers and its ability to withstand our droughts and bushfires.

Flowering time is normally in late winter and spring. 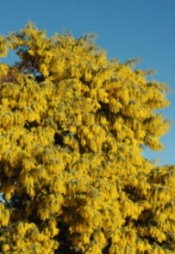 The Golden Wattle has a beautiful fragrance and stunning bright yellow flowers; you can see it in many household gardens in the south-eastern part of Australia.

Officially proclaimed as the National Emblem on the 19th of August 1988, but has been unofficially accepted as our Floral Emblem since federation in 1901.

September the 1st is National Wattle Day in Australia.

The Australian National Colours of green and gold are representative of the Wattle in flower.

The Golden Wattle is an Australian Symbol of unity, resilience and spirit of the people of Australia.

Get more information about the Wattle from the Australian Government

Discover more Australian Flora and Floral Emblems of our States and Territories.