The Kangaroo is the unofficial Animal Emblem of Australia

The Red Roo is the largest living marsupial anywhere in the world.

Growing up near Tibooburra, New South Wales we saw plenty of roos.

We once had to keep a joey but as soon as he could fend for himself our Father returned him to the bush.

We love them and think they're awesome, they are strong, fast and a unique Australian animal.

Just like the Koala they are a marsupial mammal, most of them graze on the Australian plains, but Tree Kangaroos, like the Koala, are arboreal. 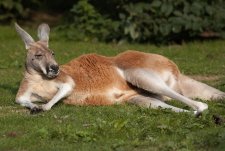 They have long, very powerful hind legs and feet, they have a long tail, which is used for balance. Their hind legs make possible their amazing leaps and are also useful for self defense.

Their head is small, their ears are large and rounded and their fur is soft and woolly.

They feed on grass and other vegetation, and are the principal grazers of the Australian plains. They move about in herds called mobs and sleep on the ground at night.

Females normally have one joey yearly. But during extreme climate conditions (droughts) many of them perish so when the drought breaks females can support three young in varying stages of growth.

The newborn joey then climbs to the pouch and attaches itself to a teat. The joey will usually stays in the pouch for about nine months before starting to leave for short periods of time. The joey is fed by its mother for a further 18 months.

There are less red roos than grey, but they are the most well known overseas. The red roo is found in the arid and semi-arid centre of the continent.

The Eastern Grey is less well-known overseas than the red, but is the most often seen here in Australia, as its territory is the eastern part of the continent.

The Western Grey is a little smaller than the eastern grey. It is found in the southern part of Western Australia and in South Australia, near the coast.

The Antilopine Kangaroo is, basically, the same as the eastern and western greys except it is found in the far north of Australia. Like the grey it is an animal of the grassy plains and woodlands.

In addition to the above, there are about 50 smaller macropods that are closely related, including Wallabies, Wallaroos, Tree Kangaroos and Pademelons.

They are the only large animals who hop to move. Red Roos hop at about 20 to 25 km/h, but can reach speeds of up to 70 km/h, over short distances.

Because of their long feet, they cannot walk normally. To move at slow speeds, they use their tail to form a tripod with their two front limbs. They then raise their back feet forward, in a movement called "crawl-walking".

A legend about their English name is that it came from the Aboriginal words for "I don't understand you."

According to this story, Captain James Cook along with Sir Joseph Banks was exploring Australia when they saw the animal. They asked a nearby aboriginal what the animals were called. The aboriginal said "Kangaroo", meaning "I don't understand you", which Captain Cook thought was the name of the animal.

Although never "officially" proclaimed as the Australian Animal Emblem most Australians consider them to be our National Animal.

The Red Kangaroo and The Emu are featured on the Australian Coat of Arms.