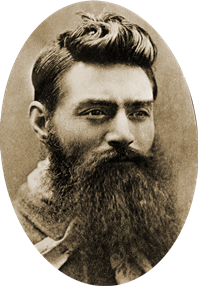 Ned Kelly was a scoundrel, bushranger, cattle and horse thief, bank robber and cold blooded killer who led the Kelly gang from 1870 until his death by hanging in 1880.

It says something about a nation that reveres a criminal and serious lawbreaker as a national icon, a man idolised for his contempt of authority and the law.

Australians are mostly law abiding citizens, respectful of the authority of government and the courts but somehow this villain and his legend has won their way into the hearts of a very large percentage of everyday ordinary Australians.

Ned Kelly was no 'Robin Hood' stealing from the rich to give to the poor. In fact on occasion he would steal from the poor as well, and threaten them with extreme violence if they did not surrender to his demands. He certainly had a great hatred of the police, troopers or traps as they were called, and had no hesitation in shooting them in cold blood, armed or not.

Ned's first brush with the law occurred in 1869 when he was just 14 and then again a year later in 1870 when he was charged with assisting a bushranger but got off when no one could positively identify him. 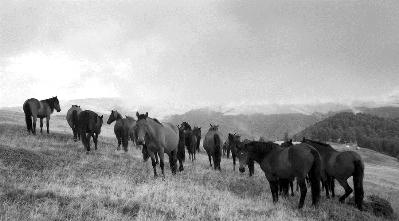 Then in 1871 he was sent to gaol for three years for horse-stealing. A few years later his younger brother Dan was also jailed for house-breaking and robbery and on release also got involved with horse stealing. 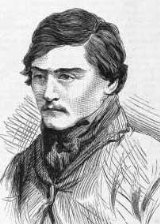 When a lone police constable, Alexander Fitzpatrick came to arrest Dan, Ned became involved and shot the trooper, wounding him in the arm. He warned the wounded man to say that it was an accident and that the pistol had gone off accidentally. Fitzpatrick realizing his situation agreed but on returning to Benalla reported the incident.

The following day a party of troopers went to the Eleven Mile Creek and arrested Ned's mother, Mrs Kelly and several other family members.

Ned and Dan Kelly could not be found but those arrested were sentenced to six years imprisonment, while Mrs Kelly was sent to gaol for three years. 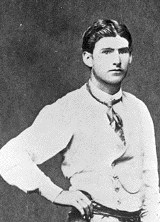 This seemed to unleash the very devil in Ned and he took his revenge! When four troopers came searching around Stringy Bark Creek a few weeks later, the Kelly brothers along, with Steve Hart, aged 20 and Joe Byrnes, just 19, shot three of them dead. The fourth trooper escaped and managed to get back in to town to report what had happened.

Rewards of £100 each (over $11,000 in todays money) had been offered by the Victorian Government for the capture of Ned and Dan Kelly up until then but now it was increased to £500, while similar rewards were offered for Hart and Byrnes.

The Kelly gang legend grew as more reports of their exploits were published by the press of the day. By 1878 the gang had stolen more horses and food from farmers in the district and held up the National Bank in Euroa making off with almost two thousand pounds.

Just over a month later they held the town of Jerilderie for more than 3 days , robbing a number of citizens and then holding up the Bank of New South Wales and stealing more than two thousand pounds. 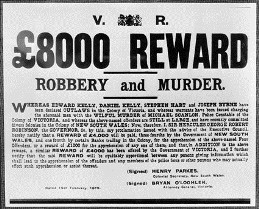 After the daring Jerilderie raid the government upped the reward for the capture of Ned and Dan Kelly, Joe Byrnes and Steve Hart to £3000, dead or alive. The banks in the colony kicked in as well and the reward grew to £8000,(over $850,000 in today's money) two thousand pounds per man, the highest reward ever offered for the capture of bushrangers in Australia. 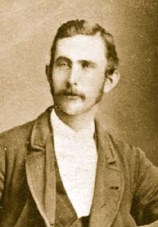 It was at that time the Kelly gang disappeared for almost a year. There were rumours that they fled the district completely and moved to other parts of Australia.

It wasn't until the fiance of Joe Byrnes' sister, Aaron Sherritt, decided to switch sides and help the police track down the gang so that he might claim the reward that they re-appeared, and that was to shoot Sherritt dead.

The shooting caused fresh outrage and the police put a special force together in Melbourne and set out by train for a showdown with the gang. On reaching Glenrowan they learned that Ned and his gang had torn up the rail tracks, taken a large group of hostages and barricaded themselves in at the Glenrowan Inn prepared to fight to the death.

The police and troopers surrounded the Inn and a fierce gun battle broke out during which several innocent hostages were shot and killed by police. Towards evening there was a brief lull in fighting and the men, women and children were allowed to leave. The fighting then continued through the night and when morning broke another party of troopers arrived to relieve the weary police. 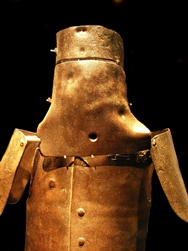 Under the cover of darkness Ned Kelly had slipped out of the pub and donned a home made suit of armour. He suddenly appeared out of the bush brandishing pistols and firing at police.

The armour was made of iron a quarter of an inch thick, and consisted of a helmet, long breast-plate, shoulder-plates and back-guard. The helmet resembled a nail can without a crown, and included a long slit for the eyes. The suits' separate parts were strapped together on the body while the helmet was separate and sat on the shoulders, allowing it to be removed easily.

Police returned fire but they found their bullets bounced harmlessly off the armour and Ned continued to advance. One of the troopers took aim at Ned's legs which were uncovered and he fell to the ground crying out "I'm done for"!

Ned, although wounded was quickly arrested and the police and troopers continued firing at the Inn. 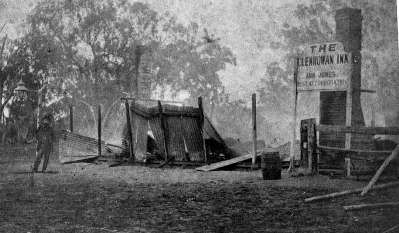 At around 3pm in the afternoon the building was set on fire and the troopers rushed forward only to find Joe Byrnes lying dead in the bar while Dan Kelly and Steve Hart were found dead in a small parlour off the bar. From the position in which they were lying it was thought that they had either committed suicide or that they had simultaneously shot each other. 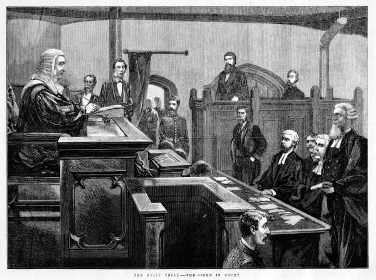 From The State Library of Victoria; Illustrated Australian News

Ned Kelly, 'the last of the bushrangers,' was tried and found guilty of his crimes.

On November 10th, 1880 Ned was allowed to see some of his family members briefly; his Mother was one and her last words to him were "mind you die like a Kelly, Ned!"

He was hanged in the Melbourne gaol, on November 11th, 1880 where his last words were "such is life!", he was buried in an unmarked grave inside the walls of Pentridge Prison.

Footnote; On Friday 18th January 2013 Ned Kelly was given a church funeral service and was finally laid to rest in an unmarked grave near his mother in Greta Cemetery.

Pentridge Prison was closed in 1997 and the land cleared for development. At that time the mass grave of all the criminals who had been executed for their crimes was uncovered and through DNA evidence the skeleton of Ned Kelly was identified and eventually handed over to the family for burial.

The remains were buried, minus the skull which was stolen around 1979 and never returned. Its whereabouts remains a mystery.

Ned's grave will remain unmarked because his descendants believe that given his standing as something of a legend in Australian folklore, a headstone would become a monument and little more than a tourist attraction.

Yet, when Ned was sentenced to death, thousands of people rallied to save his life.

Was he a villain or was he a hero? And why has he achieved the status of a true Aussie folk legend.