An Encounter With A Skyrocket
A Short Funny Story

I have a lot of funny stories from my early years growing up in the outback of Australia.

This one I remember well because I loved the Bonfire Nights and can recall my parents, and many others, laughing for years about Clary and the skyrocket.

When I was about six or seven I remember people from the township and surrounding areas gathering for Guy Fawkes Night or as we called it "Bonfire Night" on the 5th November and this short funny story comes from one of those nights.

Our parents, along with every other adult, put in money to purchase huge quantities of firecrackers of various sizes and dimensions and we would all have a "cracker evening" blowing these things sky high. It was not particularly smart or even safe, but back in those days nobody took much heed in the correctness of such things. 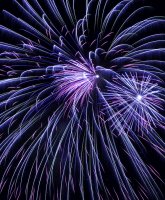 To set the scene of the tale I need to give you a little background information.

Clary was one of the characters that was born and bred in and around the outback area. He had a funny little garage that repaired cars and sold fuel.

Everyone around the area avoided asking him "how are you today Clary?" because if given the opportunity Clary would proceed to tell you exactly how he was, this tended to be a minimum of at least a half hour of listening to him bellyache on as to the poor state of his health.

People would simply go cross-eyed with boredom and they must have found it almost impossible to keep quiet when the urge to tell him to shut up would have been so strong.

Clary, of course was at the Bonfire evening, holding court, droning on about all his ailments etc.

The crackers were all being set up to be lit; all of us youngsters were tearing around, breathless with excitement, waiting for the fireworks to take place.

Amongst these lethal weapons were large crackers called "sky rockets". The adults would place them in the upright empty beer bottles and light them, they would launch into the air and explode sending coloured sparks everywhere! 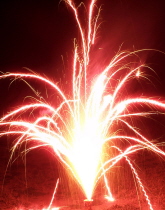 As one of the adults lit the skyrockets, he (or she) accidentally knocked over one of the beer bottles with a lit skyrocket in it. It took off and landed, appropriately, right in Clary's, always open, mouth!

It did some serious damage. The unfortunate thing for Clary was that all the adults could do was mutter, with hands in front of their faces, that at least this would shut Clary up for a few months. It did of course, with him having a very sore mouth and sucking his food through a straw for some time.

By the way, Clary had his own form of revenge on the unsympathetic bunch, because for years afterwards the whole countryside suffered as Clary would recall the unfortunate incident as often as possible. And a whole new avoidance mechanism to ever asking that question "How are you today Clary?" took over in most folks.

As time went on this short funny story become one of the bush yarns that simply got funnier.