Information & Facts About
The Australia Government


Our Australia Government is based on the Liberal Democratic Westminster system of Great Britain, which includes religious tolerance and freedom of speech.

The formal name for Australia is the Commonwealth of Australia.

The Commonwealth of Australia is a constitutional monarchy, a federation, and a parliamentary democracy.

In 1901 the six independent self-governing British colonies agreed to join together and become six states of the new nation of Australia.

Australia has a written constitution that sets the responsibilities of the Federal Australia Government. State and Territory Governments are responsible for all matters not allocated to the Commonwealth.

State parliaments are subject to the National Constitution as well as their State Constitutions. A federal law overrides any state law not consistent with it.

The Government of Australia is an elected parliament with two chambers: the House of Representatives and the Senate.

Federal elections in Australia are held approximately every 3 years, with the governing party changing about every 5 years since Federation in 1901. 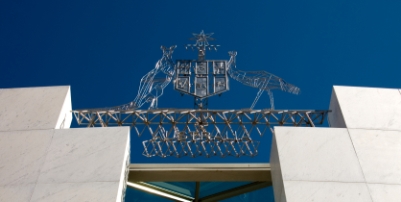 In Australia it is compulsory for all citizens over the age of 18 to vote in both federal and state government elections. If you fail to vote you may face fines or even prosecution.

In 1962 All Indigenous Australians were given the right to enrol and vote. Enrolment was voluntary, but for those enrolled voting was compulsory.

The first Prime Minister of Australia was Sir Edmund Barton who served from the 1st January 1901 to the 24th September 1903.

The Administrative divisions of mainland Australia's 6 states and 2 territories are: