Australian Gemstones include the Australian National Gemstone; the opal

The opal was proclaimed the National Gemstone on the 27th of July 1993.

The opal is famous for its brilliant colours. Australian opal has a wide and vivid range of colour from clear through the spectrum to black.

The most famous is the black opal from Lightning Ridge in New South Wales. Australia is the only country where you find black opals.

Australian opal is superior in quality to that found in other countries. It is less likely to shatter or craze because of its low water content.

The opal fields in Australia are bigger than the fields found in the rest of the world combined.

More than 95% of the world's opal comes from remote central Australia.

According to Indigenous stories, the colours of the opal were created by a rainbow when it touched the earth.

Opal is known to Indigenous Australians as the fire of the desert. 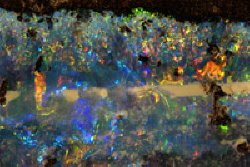 Go to next symbol: Golden Wattle