(We don't want to offend anyone with a sensitive nature so please be aware that the Australian Humour page contains some swear words.)

How does one best describe Australian humour?

Australia is a pretty unique country and it's often said that we have an unusual sense of humour. That could well be because we are very distinctive in many ways.

Question: What country would vote for a Prime Minister who was a beer drinking champion at university, a well-known larrikin, a womaniser, a party animal, a stirrer and someone who told all Australians on national TV to 'pull a sickie' the day Australia won the America's Cup Yacht Race?

Answer: Australia. His name was Bob Hawke and we loved him; he ran the country for ten years.

A good indication of Australian humour comes from Bob Hawke.

Not long before he became Prime Minister, he told this joke to 700 people at a Melbourne dinner function, complete with an Indian accent and with the Indian High Commissioner present:

"The Indian PM Indira Gandhi was looking for a way to divert attention from the political and economic mess of her government and one of her staff suggested a national lottery. The idea was accepted, the lottery was organized and the whole of India bought tickets in the hope of winning one of the three mystery prizes".

The draw was done in a large stadium, watched by millions of people.

First the third prize was drawn; a first class ticket around the world on Air India, the winner was pretty happy with this.

Then the second prize was drawn; a fruit cake. The winner was not happy, he complained that the third prize was better,and normally one would expect the second to be larger than the third.

The compere explains; "oh, but this is a special fruit cake, it was baked by Mrs Gandhi"!

To which the winner replies; F%#k! Mrs Gandhi!

The compere; "oh no, that is first prize"!

The Indian High Commissioner was not impressed.....

So where did this uncommon and cheeky sense of humour come from?

There are many theories put forward but the one I like most of all came from a journalist called John Marsden, writing in 'The Age' newspaper some years ago. 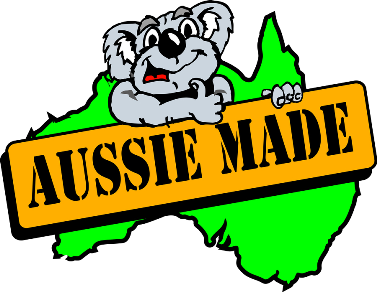 He believed Australian humour started with the convicts and early settlers who arrived on our shores more than 200 years ago.

Quote; "Those early immigrants, faced with a huge unexplored continent, so alien and desolate, knocked around by droughts and bushfires and floods, responded with comedy."

It was a response that helped society to survive and eventually prosper. Comedy has also helped to give us a national identity.

The cartoons in Smith's Weekly, the humour of Mo, the movie The Castle, caused a great outpouring of delight as Australians recognised themselves and recognised that they belonged to something. Something that is intangible and even indefinable but undoubtedly, something.

The currency in Australia is comedy. We rely on it, we use it in every situation, and we convert everything into it.

The only television programs that become part of our long-term cultural identity are the comedies:

We don't do tragedy. Not the way the Russians, the Indians, the Chinese, the Japanese or the British do. One reason is obvious. We've had a pretty easy run since 1788.

The only tragedy that we've officially recognised and incorporated into our cultural history and understanding is the ANZAC Gallipoli invasion.

When you look at Australian humour or Aussies being funny, being amused by others, swapping blonde jokes or talking about their favourite comedies on television, you see people transformed. Their bodies are energised, their eyes are alight, even the quiet and the passive start to talk. 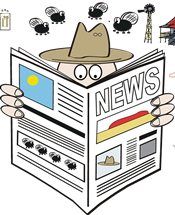 In the 1970s, Len Evans, in his column in The Australian, ran a competition to find the quintessential Australian joke.

Two drovers are talking. One says to the other: "I'm taking 600 head from Goondiwindi to Mudgee next week." The other asks, "What route are you taking?" The first man replies, "Oh, I think I'll take the missus. She stuck to me pretty well during the last drought."

I believe John Marsden captures it very nicely in that piece from 'The Age'. Thank you John!

Outback and "bronzed Aussie" stereotypes are a rich source of Australian comedy, summed up in the way Paul Hogan portrayed Crocodile Dundee in the movie of the same name.

One of my favourite unique Australian books and movies is 'They're a Weird Mob', made in 1957. It's the story of an Italian Immigrant and tells of his difficulties in trying to understand, and his eventual acceptance into, his new country.

Just finally, here are a few quotes about Australian humour and one more typical Aussie joke.

"Humour is an essential part of the Australian personality. Their humour is often aimed at themselves or their country, and is often self-deprecating."

"I sometimes find it too camp and crude but the part of it which most appeals to me is the ever present sense of irony, stoicism and dark moods underlying it - 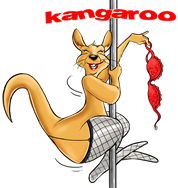 Australians like to joke about tragedies as a way of coping with them in a way that, for instance, the more sentimental Americans would find rather inappropriate".

" Australian Culture feels as grotesque as The Day of the Locust. There's no sense of a high culture anywhere, and extreme characters abound. TV ads are often leeringly sexual ("These are the only balls you'll see at our health club," says an ad for a women's workout centre, focusing on some tennis balls)"
Phillip Weis - American journalist.

"Any political candidate who declared God was on his side would be laughed off the podium as an idiot or a wowser (prude, intrusive bluenose)."
Robert Hughes - Australian writer and historian.

If you get this joke, you understand Australian humour:

"After their boat sinks, two Aussies are left floating around in their lifeboat in the middle of the ocean. All of a sudden one of them spots a funny looking bottle bobbing in the water and pulls it out. He sees something written on the bottle but can't quite read it so he gives it a bit of a rub.

"For releasing me from the bottle I will grant you one wish."

The guy glances at his mate, smiles and without further hesitation says, "I wish the whole ocean was beer!"

The genie claps his hands together and BOOM, there's a blinding light and the genie is gone.

The guy quickly leans over the side of the boat and takes a big swig of 'water'.

"You're not gonna believe this mate, but it's really beer!"

His mate screws up his face and says "That's just bloody brilliant mate! Now we're gonna have to piss in the boat!!"

Australian humour at its best right there!

Check out our Australian Slang page for some more laughs.

Go On To Australian Convicts page