In 1973 Australia began looking for an Anthem to replace that one as God Save The Queen was the Anthem of the United Kingdom.


The final choice was made from three songs:

The Bureau of Statistics ran a national poll of 60,000 people and 'Advance Australia Fair' was chosen by over 50 per cent of those people. 'Waltzing Matilda got just over 19 per cent of the vote.

In 1977 A further national poll of over 7 million people was held to determine the people's choice; This time 'Advance Australia Fair' got just over 43% of the vote, 'Maltzing Matilda' got just over 28%, 'God Save The Queen' got nearly 19% and 'Song Of Australia' got about 9.5%.

Waltzing Matilda would have got my vote but probably wouldn't have been the greatest choice considering it's about a bloke stealing a sheep and camping by a billabong; perhaps not the best image to use on the world stage to represent Australia but I like it and I'm sure a lot of other Aussie's do too.

Advance Australia Fair was officially proclaimed as the National Anthem in 1984.

Australians all let us rejoice,

For we are young and free;

Our home is girt by sea; 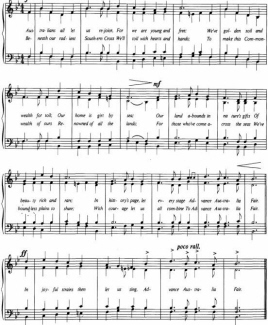 Our land abounds in nature's gifts

Of beauty rich and rare;

In history's page, let every stage


Beneath our radiant Southern Cross

We'll toil with hearts and hands;

To make this Commonwealth of ours

Renowned of all the lands;

For those who've come across the seas

With courage let us all combine

Go to next symbol: Australian Colours