Australian Values
What Do Australians Value?

So what are Australian values; what does an Aussie truly value, what do we really care about?

A fair go for everyone.

Freedom of the press.

Sport, any sort of sport.

Generally speaking Australians have an egalitarian, relaxed attitude to life, easy going and something of a live and let live approach.

A mate is a friend or partner and having good mates is paramount in any real Aussies eyes. It probably goes back to our convict past when the original 'us against them' attitude was born with the large number of convicts and their small (but heavily armed) number of British keepers.

Mateship is also part of the ANZAC legend when Australian (and New Zealand) soldiers won the respect and admiration of those they fought, with their courage under fire and in battle, their dogged determination to never surrender and how they looked out for each other.

In fact mateship is even enshrined in military training. Young recruits are taught about "a will to win, dedication to duty, honour, compassion and honesty, mateship and teamwork, loyalty, and physical and moral courage."

Mateship and the loyalty that comes with it are our most prized of Australian values.

Next on the Australian values list would be the spirit of the 'fair go for everyone'. This comes from our belief that all Australians are equal, no matter what they do or who they are.

Laws in Australia are predictable and known to everyone, they are fair and apply equally to all members of the community, including those in government. Our courts, we believe, must be independent of the government and be open to all.

The principle of a fair go also has much to do with the work place and the strong role that unionism plays in Australian life. A fair day's work for a fair day's pay has long been accepted as a right for all and most young Aussies believe it's only fair that they have the right to own their own home.

One of the greatest Australian values we have is the freedom of the press and although, as in many other countries, our newspapers are run by an increasingly smaller number of media barons, we have a wide and healthy selection of TV and radio networks and with the sudden explosive growth of the internet, even more avenues of reporting of stories and opinions are now available.

Other values include freedom of religion, equality of men and women and a commitment to obeying local laws.

Sport, almost any sort of sport, is an important part of the culture in Australia and forms part of what an Australian values.

Because of our climate we can attend or participate in almost any chosen sport all year round. We particularly love our cricket in summer, Australian rule's football or rugby league in winter, horse racing, basketball, bowls and soccer (football) which is now gaining more popularity.

Most major sporting events are written about, read about, talked about and televised or covered by the radio.

The government has gone to extraordinary lengths to introduce special laws to protect free-to-air TV stations so they can cover all the major sporting events. It would be un-Australian to rob an Aussie of the cricket or footy by charging to watch on TV such important national events!

As a nation, Australia is proud of its international standing in sport. For a small nation of 22 million, we punch well above our weight on the world sporting stage.

Our Olympic and Paralympics teams are a great source of pride and each year millions of dollars are spent by our government to ensure we maintain our place in the world of sporting competition.

We also have a large number of national teams in sports such as cricket, rugby union, rugby league, basketball, hockey, netball, soccer and softball to mention just a few.

Tolerance also rates highly as something an Australian values. We are one of the most multicultural nations in the world and every year we continue to accept immigrants from the four corners of the globe who are free to bring with them their cultural heritage and customs.

The 2011 Census showed that over one in four of Australia's 22 million people were born overseas.

Recent governments have pushed heavily the idea of a "shared national identity", strongly grounded in such well known Australian themes, as 'mateship' and a 'fair go' which are principles many immigrants are attracted to.

Just finally, the Australian government now requires new residents or immigrants to learn as much as they can about their new country when applying for a permanent visa. 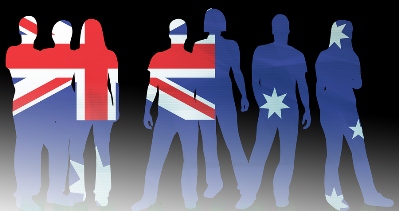 The information they are required to read before they sign the 'values statement', which outlines Australian values, is called the Life in Australia book. This book provides information about Australian history, culture, society and the values we share to help applicants understand the values statement. It gives a great insight into who we are and what we value as a nation of people.

It reads; Australian society values respect for the freedom and dignity of the individual, freedom of religion, commitment to the rule of law, Parliamentary democracy, equality of men and women and a spirit of egalitarianism that embraces mutual respect, tolerance, fair play and compassion for those in need and pursuit of the public good.

Australian society values equality of opportunity for individuals, regardless of their race, religion or ethnic background.

Go On To Australian Humour page