The Brolga is the Queensland Bird Emblem.

They are a member of the Crane family and also known as the Australian Crane or the Native Companion.

A tall, slender grey to silver-grey crane, that stands about 1 metre, or just over, high, with a broad red band extending from the eyes around the back of the head.

They are omnivores, so they eat both vegetable and animal matter, they feed on an assortment of wetland plants and a variety of insects and small vertebrates like frogs.

Brolgas stay together for life and gather together in their family groups to form large flocks in the non-breeding season.

They are famous for their elaborate mating dance, where they jump in the air with their wings spread wide, they prance about bowing and calling and shaking their head.

When we lived in the bush a pair would visit every year for a few years and stay near our dam, our mother used to sit on the dam bank for hours watching them, she absolutely loved them and thought their dancing was beautiful, she knew when they were due and looked forward to seeing them. 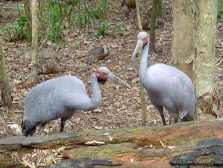 The female usually lays two eggs and both sexes sit on them for 28 to 30 days, when the young are born both parents care for them. 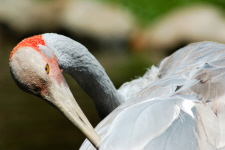 They are found in north and northeast Australia, and especially in northeast Queensland, they are also found as far south as Victoria and the northern part of Western Australia.

The Brolga was proclaimed the Queensland Bird Emblem in 1986

Go to next bird page: Budgerigar

Return from The Brolga to Australian-Information-Stories home page