The Short-beaked Echidna is also known as the Spiny Anteater and is one of only two members of the monotreme family. The other is the Platypus. 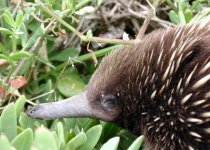 Monotremes are egg-laying mammals and live only in Australia and New Guinea.

They are 30 to 45 centimetres in length and weigh between 2 and 5 kilograms; their snout is pointy, with a very long sticky tongue, that measures about 75 millimetres in length.

Their body, except for the underside, face and legs, is covered with cream coloured spines, which can be up to 50 millimetres long, there is fur between these spines, with colours that vary from golden to dark red brown and black. Their limbs are short with strong claws.

If they feel threatened or they are disturbed, they will use these strong claws to dig into the ground rapidly leaving only their spines exposed. If the ground is too hard and they can't dig into it they'll curl into a ball.

They find food by smell, using sensors in the tip of their snout. They are strong diggers that use their clawed front paws to dig out their food and make their burrows.

They feed mainly on ants and termites, although, they will eat other things like grubs, worms and larvae.

They also use their strong front paws to open up the ant or termite nest, probing the nest with their sensitive snout and catching any insect in there on their fast moving sticky tongue.

Breeding time is from July to August. About two weeks after mating the female lays one egg into her pouch, which hatches after about 10 days.

The young, called a puggle, leaves the pouch after about two to three months but continues to suckle until completely weaned at around six months.

They don't have nipples so the milk is secreted through two patches of skin.

The Short-beaked Echidna is the only species found in Australia, it is found throughout Australia, including Tasmania.

They has the widest distribution of any native Australian mammal.

Go to next animal page: The Kangaroo