Funny Campfire Story
From The Time Of Droving

I recall this funny campfire story from a conversation at the end of a hard day riding with the cattle drovers in the outback of Australia.

To digress a little, drovers were a group of blokes, who would be engaged to drive herds of cattle down from the top of Queensland to the sale markets in either South Australia or New South Wales, part of their journey would take them along the border fence where we lived.

Unfortunately these blokes have long since ceased to exist in this capacity as today the cattle are simply trucked to the markets in huge road trains, some with as many as three trailers. The drovers have become forgotten men from a time that has given way to progress.

As a teenager one of my greatest joys was to ride with the herd for the three to four days it took the drovers to round Cameron's Corner and then head on to their destination. I would ride with the drovers during the day and camp out overnight for the few days I would spend with them.

Father and Mother would join the campfire gatherings on some of the nights. 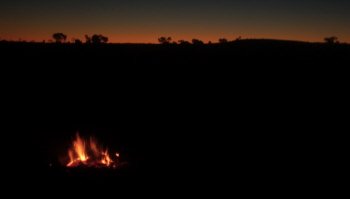 On one of these cold nights they were sitting around a campfire with a bunch of the old drovers.

Our Father was a very well read person and had huge knowledge on many subjects. He was also a great story teller and joker.

I recall the following funny campfire story with amusement, and in telling it to people over the years I have found most of them have also found it very funny.

Father, having joined the old blokes in the sipping of over-proof rum and telling yarns and jokes, got around to discussing a bit of our earlier history with the capital city of Tasmania, Hobart featuring in the conversation.

One of the older drovers (in fact they all appeared old to me) who was by now three sheets to the wind on the rum, mused in a loud voice "Hobart? Yep I know Hobart I drove a herd of cattle there once!"

My Father retorted in an amazed voice "How the f... did you get them across Bass Strait?"

The old block was not daunted by this question and further amazed Father with his reply "I didn't take 'em that way!!"

Knowing this was the only way from the mainland to Tassie all I could visualise were all these cows swimming for dear life in the sea, with the waves crashing over them, and the staunch old drover cracking his long stock whip from the back of his horse.

Father couldn't see my vision at all and just shook his head in disgust...!

Read another short funny story: Clary and the Skyrocket