Another one of my sister's funny stories from her time on the border fence. A funny cat story all the family got a laugh from.

Both Suzie and Maurice remember this happening. I can remember hearing this funny cat story being told quite a few times over the years.

I have to say for me one of the funniest things about this story was not the story itself but how our Mother would just about wet herself laughing every time she heard it (obviously the memory of it amused the hell out of her) and how our Father would shake his head in disgust at her for still laughing at his predicament.

This funny cat story is from the time when we lived at Hamilton Gate and I remember it happening one morning.

Maurice and myself had this habit of scooting out of bed early in the morning and heading for the hot artesian bore in our backyard.

Father was a man of habits as well. Every morning after breakfast he would wander down the back yard past the artesian bore to the toilet with a magazine tucked under his arm.

To set the scene of what took place, a bit of information on the "outback dunny" (as it is known!) is needed. 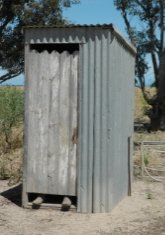 Toilets in the outback are holes dug in the ground with a corrugated iron building placed on top, with a door (sometimes with a door, but not always) you can look out on the scenery, or lack there of, depending on your perspective.

Normally inside this tin building there is a bench with a hole cut out to sit the appropriate part of your anatomy on to do the business you have ventured in there to do.

When the toilet got a bit smelly a good douse of petrol thrown down it followed by a match fixed that up real quick.

Toilet paper was cut up squares of newspaper hooked on a wire peg alongside the bench or on the back of the door, if you had one. It was always newspaper because magazine paper, being shiny, was not suitable and did not perform the task in the same way.

Our Father was a great lover of animals and as kids we always had plenty of cats, dogs and other animals to look after and love.

Well Dad had this favourite cat he called "Tippy" the cat was a tabby grey with a white tip on his tail thus the name "Tippy" evolved.

Tippy would walk with Dad every morning to the dunny and sit on the bench alongside him; Dad would pat Tippy on and off while he sat doing his business and reading a National Geographic magazine.

This particular morning (Dad relayed the story later) Tippy did not accompany him on his morning walk to the dunny. Dad said it briefly passed through his mind, that the cat wasn't there but he proceeded with his morning ritual anyway, minus the cat. 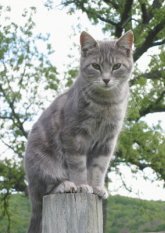 Upon finishing his business Dad stood up from the toilet bench, and just when he bent down to pull his underpants and trousers up Tippy came running through the doorway. Tippy took a great leap to position himself for his morning pat and went straight through Dad's legs before he could pull his pants up and you guessed it, straight down the toilet hole.

Apparently (once again Dad's version) he was briefly considering how he was going to get the bloody cat out of that stinking deep hole, when Tippy, screaming and scratching, came up out of the hole and landed right in Dad's underpants, looking and smelling pretty worse for wear.

Apparently chaos proceeded as Dad tried to protect "the family jewels" as he put it, and fish the shitty cat out of his underpants.

We found out what had happened when we saw Dad washing his underpants in the hot bore and the cat streaking off down the back yard.

He was not a happy Daddy, mind you Mother laughed until she cried over this for years, further impressing Dad.

Tippy went missing for about a week, we figured it must have taken him all that time to clean himself. Not a pleasant thought.

As I recall the ritual did continue with Dad being very careful from then on that Tippy was there with him, leaving nothing to chance.

This funny cat story has done the rounds over the years at family gatherings.