The Southern Hairy-nosed Wombat is the South Australia Animal Emblem.

Their nickname is: The bulldozer of the bush.

The Hairy-nosed is also called the Soft-furred Wombat, the Plains Wombat and the Broad-nosed Wombat.

They have soft grey to brown fur and are thickset and powerful. They have a broad and blunt head, small pointed ears and short muscular legs.

They usually measure between 75 to 100 centimetres in length and 25 to 35 centimetres in height. Their usual weight range is from 18 to 35 kilograms.

They are very powerful diggers who live in colonies in complex tunnel systems that have many entrances and exits.

In each tunnel system there are from 5 to 10 Wombats living, with an equal number of males and females.

In the warren system the males occupy the middle and the females the smaller outer tunnels.

They have only two real predators, the Dingo and the Wedge-tailed Eagle. 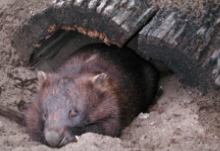 If they are threatened or chased by a smaller animal such as a fox or dog the Wombat will normally prefer to run into its burrow if it can but if they have to they will defend themselves by kicking and clawing and trying to crush the threat against the top or sides of their burrow.

Australian Wombats are nocturnal; they spend their days in their cool burrows.

Wombats have teeth that grow all through their life.

They eat native grasses such as wallaby grass and kangaroo grass, sedges and roots of shrubs and trees.

Breeding time is usually between September and December.

The gestation period is 20 to 21 days; one Joey is usually born and after crawling to the mothers pouch stays there attached to a teat for anywhere from 4 to 10 months, with the usual being around 8 months.

The Southern Hairy-nosed Wombat is found in pockets in southern South Australia mainly around the Great Australian Bite.

Australian Wombats are a protected species.