The Koala is the Queensland Animal Emblem.

We never saw them when we were kids living where we did in the bush but when I lived in Queensland later in life I saw them all the time and obviously as Aussie kids we just loved them.

Even though they look like a cuddly teddy bear, they are not koala bears, they are marsupials!

The difference is that a Marsupial is a certain class of mammal living primarily in the Southern Hemisphere.

They have a distinctive characteristic, common to most of the Marsupial species in that the young are carried in a pouch, while a bear is a larger mammal, mainly from the Northern Hemisphere.

The Australian Koala is an arboreal (tree dwelling) marsupial mammal.

They have a compact body with thick grey coloured fur, a broad head, large nose, and small eyes.

We live in Adelaide in South Australia, quite close to native bushland with lots of Eucalyptus trees. Over the years we have noticed a huge increase in their number that are now almost permanent residents in our trees.

You must remember that they are wild animals, by that I mean they live in the trees and very rarely have any contact with humans. That said, they are quite docile creatures and will allow you to get quite close without scampering away.

Here's a video I took of a koala drinking from our backyard swimming pool recently. It was early morning and already quite hot. The temperature forecast for the day was over 40 degrees Celsius (105 degrees Fahrenheit) and this cute koala decided to have a long drink, firstly from the pool and then from a large pan of water I had placed near the pool especially for visiting and thirsty marsupials.

The reason I had the pan there was because we have had a number of them drinking from the pool and a few weeks previously, sadly, one of them fell into the pool and drowned. No one was home at the time and it was a dreadful shock to arrive home from work and find the poor koala on the bottom of the pool.

They are herbivorous marsupials - meaning they feed on plants.

They lives almost entirely on eucalypt leaves, very rarely drinking water as they gain enough moisture from the gum leaves. Apparently no one mentioned this to the one in our video as he drank for about 20 minutes before wandering off to an olive tree (?) and finally scampered up a gum tree for a feed of leaves and a relaxing day.

They spend about three of their five active and awake hours eating.

As they do not use dens or shelters, their fur is important for insulation.

They have strong limbs, large paws and sharp claws which they use to grip smooth-barked eucalyptus trees.

Females reach maturity at 2 to 3 years of age, males at 3 to 4 years. They can produce one joey each year for about 12 years.

A baby is referred to as a joey and is hairless, earless and blind.

Breeding takes place once a year, normally between November and March. Gestation period is around 35 days.

When born, the joey, which is less than 15mm long, crawls into the downward facing pouch on the mother's belly and attaches itself to one of the teats, they remain in the pouch for about six months, feeding only on milk.

After this period the joey will remain with its mother for a further six months or thereabouts, clinging to her back, and learning to feed on both milk and gum leaves until it is weaned at about twelve months of age. 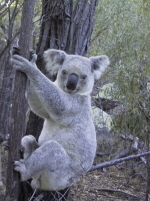 They are basically solitary animals, other than during the breeding season, there is very little interaction between them.

Any koala that trespasses into another's tree can be attacked but they leave scent markings and scratchings to warn other animals that the tree is occupied. Being mostly nocturnal animals means they generally feed and move after sundown.

They rarely leave the trees as the trees offer security, and when they do it is largely to move to another tree for food or, as in the video, to get a drink when it's very hot.

They have a variety of sounds which they use for communication. Mothers and babies make soft clicking and squeaking sounds, they will gently murmur to each other, or they will grunt if they are cross. All of them can let out an alarming, high-pitched scream when they are afraid. 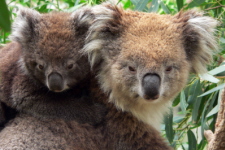 Before 1900 they numbered in the millions, but in the early 20th century they were hunted almost to extinction, mostly for their fur.

They are mainly found in South Australia, Victoria, New South Wales and Queensland. There is some concern that their numbers are dwindling and they could become extinct in some areas of Australia as their native habitat is encroached upon by an ever spreading suburbia.

There have also been diseases in recent years that have hit some colonies hard.

They have been relocated to a number of islands where they were not found naturally.

On the mainland the populations are declining. In contrast to the mainland, on many islands they have reached what has been described as "plague" proportions.

This is an ongoing issue for some Australian communities.

If you're coming to Australia and you would like to cuddle a tame koala, there are a number of wildlife parks where you can have a cuddle and get your photo taken, including Cleland Wildlife Park in the Adelaide Hills in South Australia and Currumbin Wildlife Sanctuary on the Gold Coast in Queensland.

The koala is a protected species.

The Koala was proclaimed the Queensland Animal Emblem in 1971