Many people consider them to be one of the most beautiful Australian Cockatoos.

They measure around 35 centimetres in length and are a beautiful White Cockatoo with a pink face, pink chest and pink belly. They have a brilliant red and yellow streaks in a white crest.

They feed on grass seeds, paddy melon seeds, eucalyptus seeds and bulbs and nuts and roots.

They are usually found in pairs or in smaller groups of up to 50, they feed on the ground or in the trees.

They are also seen with Galahs and Little Corellas. 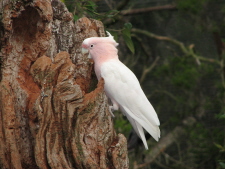 They are found in all states of Australia except Tasmania, mainly in the arid and semi arid interior, where they prefer areas around rivers with eucalyptus, mulga or mallee.

They have declined in number since European settlement.