The Legend Of The Mysterious
Min Min Light

The Min Min Light is stuff of legend in outback Australia; the light was apparently first seen about 100 years ago around Boulia in central Queensland.

The name for the lights are taken from the old Min Min hotel which burnt down in the early 1900's.

Since then the legend of the lights has grown and there have been thousands of sightings by a wide range of different people over the years.

There have been many explanations put forward as to the nature of them and many people are sceptical about them altogether but whether you believe in them or not is up to you.

There are signs all over this part of the outback about the Min Min Light.

Across the plain they're dancing,
Their light is purest white,
They beckon to be followed
Away into the night.

They have a fascination
That draws unto their hearts,
Giving birth to a desire
To join, to be a part

Of all they have to offer,
The dreams there deep inside
The dancing lights that dance about,
That do not try to hide.

The lights have been called many things,
They've lived for countless years,
The fascination that they bring
Can also nurture tears

They are eager to be followed
And often they draw near
To those who show their wonder,
Not showing any fear

And those who have been captured
By these shining, pure lights,
Have followed close behind them
Into the dark of night.

Nobody knows to whence they've gone,
For they've not been seen again,
They may be wandering helplessly
Across some endless plain.

Oh, what can be their magic,
These dancing min-min lights,
Whatever is the need for men
To keep them in their sight.

They tempt with promises of things
That man would love to know,
They offer much for answers,
Or legend has it so.

They've been called of the devil,
And also of the soul,
They're new to many people,
In reality they are old.

But they are so much a mystery,
These shining lights so bright,
And they will go on dancing,
And beckoning to the night. 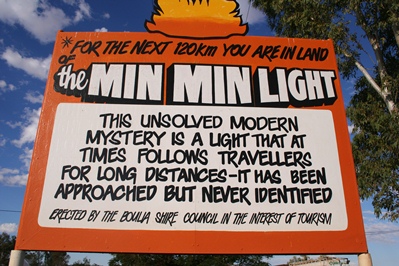