A Poem About Old Jack
The Outback Dogger

This poem is called old Jack; it was written by our mother when we lived in the Australian outback.

I don't think mum wrote this poem about any particular dogger but as a representation of all the old doggers that worked throughout the bush.

When we lived in the bush you would get blokes that just travelled around hunting dingoes.

Other Australian States also introduced similar acts for the collection of dingo scalps and the payment of a bounty for each one.

The doggers would collect the dingo scalps and get a bounty for each one they collected when they handed them in to government officials or police officers.

Some of the doggers just did it to supplement their income when they didn't have work on the stations but others did it full-time.

These days a lot of people would find this practice awful but back in the early days when the bounty was first introduced and even when we lived in the outback it was just a normal part of bush life. 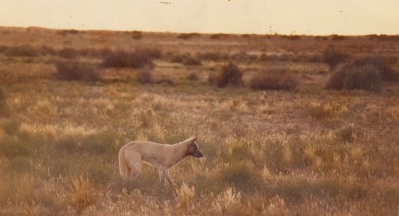 Old Jack was a dogger, a crusty old man,
He lived on his own, wandering over the land,
His home was his truck, for he carried in there
All the things that he needed, he hadn't a care.
A friend to the grazier, he was there to keep
The dingo from killing the outbacker's sheep
He never had learned how to read or to write,
But he knew about tracks and he'd follow all night.
There wasn't a place that he could call home,
But he met many people and he did like to roam.
He knew all the signs and could tell at a glance
If the drought would continue, if there was a chance
Of a storm that would settle the fine choking dust,
And all those who knew him his knowledge they did trust
Sometimes he would visit a town that was close,
And he'd tell that he really just needed a dose
Of the medicine sold by the publican there
For lately he'd felt like a wounded old bear.
He'd stay in the town for quite a few days,
And most of the time he'd walk round in a haze
It was at this time when the whiskey was done,
That he'd sit near the fire and tell to everyone
The stories and tales of his life on the track,
How he'd chased many dingoes through the rugged outback
His tales seemed to be filled with plenty of gore,
But his listeners would hear them and clamour for more.
The townsfolk declare that inside he must have a chime
That buzzed to tell him when it was time
For him to pack up, to follow the sun,
That his time for relaxing was over and done,
And he would return to his truck and to the track
That crusty old dogger known only as Jack 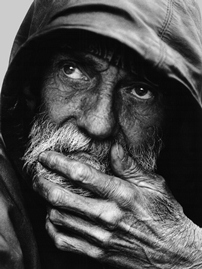 Go to next bush poetry page: The Pub Poem