The Pink Heath is the pink form of the Common Heath and is the Floral Emblem of Victoria.

Epacris contains about forty species of evergreen shrubs which grow mainly in eastern Australia and to a smaller amount in New Zealand.

The plant family Epacridaceae, the Australian heath family, is found mostly in Australia and New Zealand.

The Common Heath is found in coast and foothills regions from The Mount Lofty Ranges in South Australia and across southern New South Wales.

In Victoria it can be found in coastal regions and foothills as well as the Grampians and the Little Desert, it is also widespread and common in Tasmania. 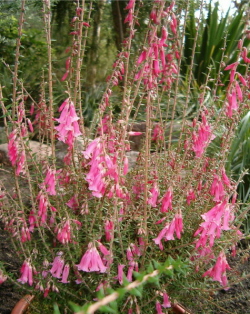 Common Heath is a slender, upright shrub which normally grows to around 1 metre in height, although they can grow higher.

The leaves are narrow and sharply pointed, they range from 4 to 16 mm in length.

The flowers are white, pink or red in colour and grow in tightly packed clusters along the stems. They are about 2 cm long and are narrow and tubular.

Flowering time is normally from late autumn to late spring, peaking in the wintertime.

Common Heath was first collected in Tasmania by the French botanist Jacques-Julien Houton de Labillardierein in 1793.

Victoria was the first Australian state to select a Floral Emblem.

Propagation is usually by cuttings or can be grown from seed.

This Australian Government page has more information on the Victorian Floaral Emblem.