Earlier on in our life in the bush we saw many working shearing sheds but as time moved on more and more of them became abandoned as the stations closed down.

I can remember as a kid going to the sheep stations around Tibooburra and watching some of the shearing going on, I used to think it was amazing that the sheep went into the sheds with their thick woolen coats and came out looking so much thinner with all their wool gone.

Because we were boundary riders kids and didn't get to do the things the station kids did it was always a bit of a treat to go to the sheep or cattle stations around the area and watch what went on when we could.

Dad would take us along when the opportunity came up just so we could see how the stations worked and so we could have a bit of fun.

There are still working sheds all over Australia but a lot of them have just closed down and they now sit totally abandoned and growing weary from no use.

Back in the beginning the shearers all used hand-held shears but now, of course, it's all done with a mechanical handpiece and not the old type shears from years gone by. 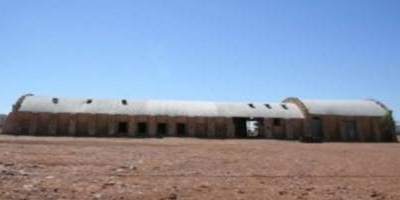 Far away in the outback solitude
Where the earth is a fine red sand
Forgotten, alone and in ruins
The abandoned shearing shed stands.

Beside the fence that once enclosed it
In a pile rusted with the years
Each pair laid upon another
Are the trusty, hand held shears 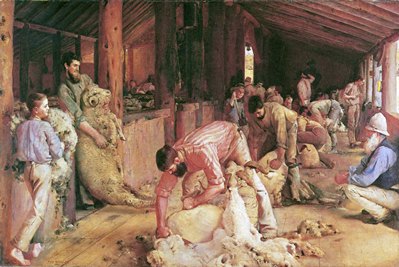 Go to next bush poetry page: The Drovers