The Tasmanian Devil is the unofficial Tasmanian Animal Emblem

The Devil is one of our unique Australian animals and the world's largest living carnivorous marsupial.

As their name suggests Devils are now found only in Tasmania, so we never saw them when we were growing up in the bush, but we love them anyway.

They are the size of a small dog and have a squat, stocky body. They have a large head with powerful jaws and they store body fat in their tails. Their fur is normally black, with white patches on the chest. 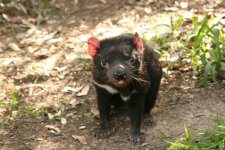 Devils are nocturnal and a burrowing carnivorous marsupial, they are the only living animal of their kind in the world, and that makes them a unique Australian animal.

They usually reach maturity at about 2 years of age. Males fight over the females when they're in the breeding season, and the female mates with the dominant male.

Mating happens in March, both day and night.

The gestation period is about 31 days, and even though the female has only four nipples and no more than four young devils can survive, she gives birth to 20 or more. 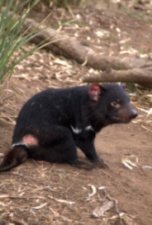 When they are born, the young move from the vagina to the rear opening pouch. Once the joeys are inside the pouch, they stay attached to a nipple for 100 days.

Once the young leave the pouch they do not return, instead they stay in their den for about three months.

They are common and widespread in Tasmania. They are found in all habitats, including the outskirts of populated areas.

Devils will hunt and eat small animals including birds, fish and frogs but are basically opportunistic scavengers and eat carrion more than they hunt for live animals. They eat all of the carcass including the bones and the fur.

Because they look and sound ferocious, the early settlers to Tasmania thought they sounded like a devil which was a contributing factor in their naming. 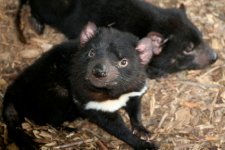 They are also very loud little animals particularly when there's a number of them eating from the same carcass, they do this to try to scare each other away.

Since 1996 Devils have been suffering from Devil Facial Tumour Disease. DVTD is devastating the Tasmanian Devil population and has spread to over 60% of the State. Scientists are working on an answer to the disease

Tamanian Devils are a protected species