Australian Pelicans measure around 1.6 to 1.8 metres in length with a wingspan of 2.3 to 2.5 metres.

They have a very large bill, which is 40 to 50 centimetres in length.

They are white with black feathers on the edges of the wings, tail and back.

Pelicans feed mainly on fish, but will eat other water animals including tadpoles, turtles and crustaceans; they swim with their mouths open wide and scoop up the fish. They do feed alone but more often they will work as a group to get the fish all together making it easier to scoop them up.

Breeding time is any time of year and depends on conditions. 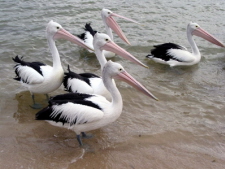 Pelicans breed in colonies that can number in the thousands.

The female lays one to three eggs; two to three days apart, both parents incubate the eggs on their feet for about 35 days, then both parents care for the young.

The first hatched chick is usually larger than any others. At about 1 month the chicks leave the nest and together with around 100 or so other chicks form creches (nurseries) for about 2 months until they have learnt how to fly and be independent.