The Fairy Penguin is one of the cutest Australian birds and is also known as the Little Penguin or the Little Blue Penguin. 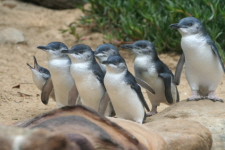 The smallest of all the Penguins measuring about 40 centimetres in length with an indigo blue body and white chest.

They feed on small fish, squid and other small sea animals, which they can dive and swim for considerably.

They feed singularly and not as a group

When they have finished feeding, they come ashore in tight small groups (for defensive purposes) at dusk and cross the beach to join the colony.

This is the well known "Penguin Parade" that can be seen on Phillip Island, Victoria, where a viewing area has been set up to allow visitors to see the parade. 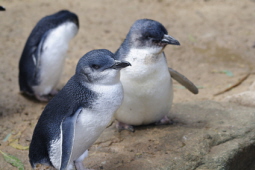 Breeding time varies depending on their location but is normally from August to February at Phillip Island and from April to December in Western Australia.

Two eggs are normally laid which both parents incubate for about 36 days then both parents share the care of the young.

They are only found in the Southern Hemisphere, along the southern coast of Australia, including Tasmania, and in New Zealand.