The Emu is the unofficial Bird Emblem of Australia

They are one of our favourite Australian birds.

They are related to the ostrich and the cassowary and the largest of the native Australian birds. 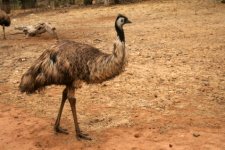 They can be up to 2 metres in height and weigh between 30 and 45kg.

they have brown/grey-brown plumage with a ruffled or shaggy look, the shafts and tips of their feathers are black. Their head and neck are feathered, they have small wings and a long neck and legs.

The Australian Emu is a flightless bird that can travel great distances at a fast trot and, if needed, can run at 50 km/h for some time.

We think they are one of the funniest native Australian birds. 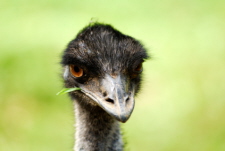 Growing up in the bush when we were kids we would laugh our heads off at them running across the plains.

As kids our father let us keep pet Kangaroos when they were joeys but he would never let us keep Emus because he was always worried about them pecking at us, especially our eyes as they love bright and shiny things.

We always loved the 'Old Man Emu' song by John Williamson so I've put it below for a bit of a laugh.

They feed on seeds, flowers, fruits, green shoots and on the parts of plants that are nutritious. They also eat insects, including grasshoppers, crickets, caterpillars, ladybirds, and ants.

They are basically solitary birds, and while they do form large flocks, this behaviour is social and comes from the common need to move towards sources of food. 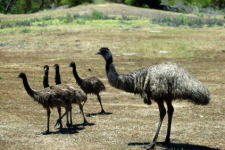 Breeding takes place during the summer months of December and January, and the pair can stay together for about five months, they mate every day or two, and then every second or third day the female lays very large, dark-green eggs that have a thick shell. On average she lays about 10 or 11 eggs but it can be more.

The male sits on the eggs, which takes about 8 weeks, and he turns them about 10 times a day during this period.

Newly hatched chicks are active and are able to leave the nest within a few days.

The chicks stand about 25 centimetres tall and they have brown and cream stripes, which are great for camouflage, this fades after about three months. 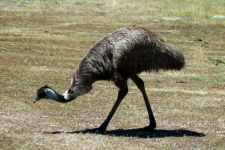 The young chicks stay with the male for up to 18 months, he teaches them how to find food and he defends them.

The chicks grow quickly and are fully-grown in 12-14 months. They can stay with their family group for about another six months before they split up to breed in their second season.

Emus live all over Australia except Tasmania.

Return from The Emu to Australian-Information-Stories home page