The Helmeted Honeyeater is the Victorian Bird Emblem.

They are one of our Australian birds that are listed as critically endangered.

Honeyeaters are unique to Australasia and are most common in Australia and New Guinea.

The Helmeted variety is the largest and the most colourful of the four subspecies of the Yellow-tufted Honeyeater.

They measure about 20 centimetres, and range in colour from black to olive brown to yellow, with a yellow crest or helmet.

Most Honeyeaters feed on nectar, but for some, such as the Helmeted nectar is only a small part of their diet.

A lot of this Honeyeaters food comes from the bark, twigs and leaves of eucalypts, and from manna, which is a substance like sap, from trees. They also feed on berries, insects and spiders. 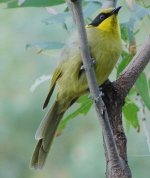 Breeding time is from early August through to early February.

Two eggs are usually laid about two to three times a year.

The female incubates the eggs for about 14 days, then both parents care for the young.

They can only be found in the Yellingbo Reserve and Bunyip State Park in Victoria.

The Helmeted Honeyeater was proclaimed the Victoria Bird Emblem in 1971