The Galah is a member of the Cockatoo family and is one of the most common and widespread Australian birds.

Their back and wings are grey and they have a pink face and chest and a crest of a very light pink.

They often form flocks of a few hundred or more and they can be fairly noisy in large groups. They make a distinctive high-pitched screech.

They eat a variety of seeds that they forage for on the ground but they also like to attack crops like wheat and oats.

They are friendly, playful and intelligent birds and can become good talkers, though their talking ability is not usually as good as some other parrots such as Sulphur-crested Cockatoos.

We used to have a Galah called Percy when we lived in the bush. We had a very large aviary with a number of birds including Percy and a Sulphur-crested Cockatoo called Captain Flint. Unfortunately Captain Flint didn't seem to like Percy very much. 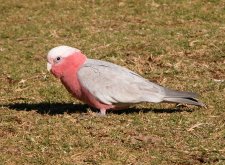 Percy could talk quite a bit but not as much as Captain Flint and usually only when he wasn't around him.

They are strong fast fliers and are often seen indulging in aerial acrobatics in large flocks.

They can sometimes act like a bit of a clown, this is probably why in Australia if someone is clowning around or acting the fool they can be called a bit of a Galah.

Breeding time varies according to their location but generally in the north it is February to July, and in the south it is July to December.

They usually lay three to four eggs, which both parents incubate for about 30 days.

They mate for life unless something happens to one of them, in which case they will take another partner. 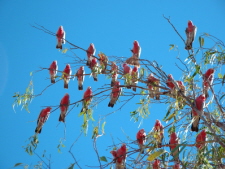 They are one of the Australian birds that have benefited from European settlement, whereas before they were rare in certain areas they are now found over most of the continent, including Tasmania. This seems to be due to the growing of grain and the increase in availability of water provided for livestock and irrigation schemes in the more arid regions.

Because of the large increase in their numbers over the years they are, unfortunately, considered a pest in many parts of Australia because of the damage they can do.