The Gang-gang Cockatoo is the Australian Capital Territory Bird Emblem. 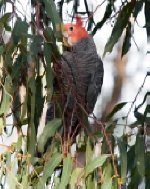 They are small, stocky Cockatoos measuring about 35 centimetres, the male has a bright red head and crest and a smoky grey body while the female is grey all over.

They have a very distinctive call, which has been described as sounding like a creaky gate.

Gang-gangs feed mainly on seeds of trees and shrubs, especially eucalypts and wattle. They will also eat berries, fruits, nuts and insects.

Breeding time is usually between October and January. 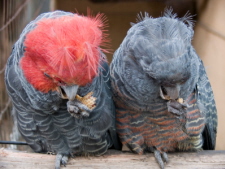 Two eggs are usually laid and both sexes share sitting on the eggs for about 30 days and then both parents care for the young.

They form monogamous pairs and usually mate for life.

Found in south eastern Australia, including southern Victoria, eastern New South Wales to the tablelands and south coast and the Australian Capital Territory.