The Royal Bluebell is the Floral Emblem of the Australian Capital Territory.

The genus (category) Wahlenbergia grows mainly in South America, New Zealand and Australia and belongs to the Bluebell family Campanulaceae.

Found mainly in the high mountain regions of the alps in the Australian Capital Territory, southeast New South Wales and Victoria.

A frost-hardy ground cover that has small dark green leaves in a rose shape about 2.5 cm long.

The flowers are a deep purple/blue colour up to 2-3 cm in diameter, and are vivid and stunning. 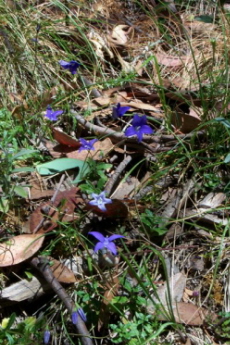 Flowering time is normally from October to March.

The Bluebell can be grown in sunny or semi-shaded positions in cool regions.

They can also be grown in pots and hanging baskets and they can be used as a ground cover.

Named in honour of a Swedish Professor of Botany, named Georg Goran Wahlenberg.

In November of 1981 a committee was formed to recommend a suitable floral emblem for the Australian Capital Territory.

They are protected and should not be picked or collected.

This Australian Government page has more about the Royal Bluebell.

Go to next flora page: Waratah