The Sturts Desert Pea is the Floral Emblem of South Australia.

The genus (category) Swainsona is an Australian plant and the species which is a member of the pea family, Fabaceae, is limited to Australia

Found on the open plains and in the arid woodlands in the Northern Territory and all mainland states of Australia, except Victoria.

The Desert Pea is an enduring plant with silky grey-green foliage arising from low stems. The leaves and stems are covered with downy hairs.

The flowers are about 9 cm long and grow in clusters of around six to eight on short, thick stalks.

The petals are normally blood red with a glossy black swelling or "boss" at the base of the uppermost petal. 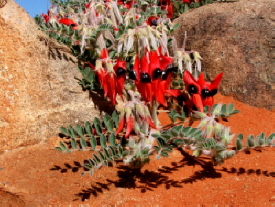 Flowering begins around 4 months after germination, under perfect conditions.

The common name is to honour Captain Charles Sturt who recorded seeing large numbers of them on his central Australia trip in 1844 to 1845.

Although they were first collected by William Dampier when he visited in 1699.

They are very distinctive and are one of Australia's best known wildflowers.

They are protected in South Australia.

The collecting of the flowers and plants on Crown land is illegal without a permit and they also must not be collected on private land without first getting the written consent of the owner of the land.

Read more about the Desert Pea at this Australian Government page.