The Black Swan is the Western Australian Bird Emblem. 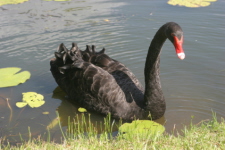 Swans are large water birds, the family of which also includes ducks and geese.

They measure up to about 1.4 metres in length and can weigh up to 9 kg, they are black with a line of white feathers on the edges of the wings that can sometimes be seen when the bird is resting or preening, and are easily seen when the swan is in flight.

They are vegetarians; they eat plants and weeds either in the water using their long necks to reach under the water or occasionally they will graze on the land.

They use calls and visual signals to communicate, they make a musical call like a trumpet sound as well as a range of softer crooning notes, they will also whistle, especially when disturbed while breeding and nesting.

Breeding time is usually from February to September.

They normally stay in pairs when mating but do occasionally mate in colonies.

Both parents build the nest and the female lays up to ten eggs, which take about 40 days to hatch and then both parents care for the young, which are called cygnets.

They are monogamous and often have the same mate for life.

Until Dutch explorers came to the Great South Land in the 17th century and saw the black variety people in Europe believed that all swans were white.

They breed mainly in the southeast and southwest regions of Australia, but are found throughout the country except for the far north and the dry interior.

The colony in Western Australia was originally called the Swan River Settlement.

Swans are a protected species in Australia.

Our Mother wrote this wonderful poem about the Black Swan.

Oh swan so silky, swan so black,
Such loveliness you are,
With curving neck that arches back,
And your eye a shining star,

You're the picture of tranquillity,
Your serenity has appeal,
And you have the ability,
My heart, my love to steal.

In the evening as the night falls,
And the shadows grow quite long,
Comes the mournful sound of your call,
So low, but very strong.

It floats across the water, still,
And far over the lonely plain,
From every silent wooded hill,
It echoes back again.

Delight and joy you bring to me,
Just once or twice a year,
Your coming is so wild and free,
And leaving brings a tear.

Of nature you're a living part,
Her loveliest of birds,
I listen to your caring heart,
Though you can say no words.

I like to watch you as you glide,
Across the water, clear,
I'd like to be there by your side,
To me you are so dear.

But the time has come for you to go,
And I watch, my heart so sad,
I want to go with you, I know,
'Would make me feel so glad'.

There's loneliness, and a sense of loss,
Your departure leaves behind,
I lay in the cool grass and I hold,
Your memory in my mind.