The White-backed Magpie or the Piping Shrike has never been proclaimed as the South Australian Bird Emblem but is a Symbol of S.A. and can be found in just about every backyard, park and street in that state.

Magpies can basically be divided into two groups; the white-backed and the black-backed.

There is thought to be up to nine subspecies of the Australian Magpie.

They measure about 36 to 45 centimetres and are solid birds, they are pure black and white, with both the males and the females of all types having black heads, with the back of the neck, shoulders and upper tail being white in the male and grey in the female.

Across most of Australia the rest of the bird is black.

The White-backed Magpie, as the name suggests, has a white back.

They are omnivorous, they eat a number of items they find at or near ground level, things such as earthworms, snails, spiders as well as insects, frogs, mice and other small animals, they also feed on grains and tubers.

They have a beautiful musical, warbling call. They often sing in chorus together and they can mimic other birds. 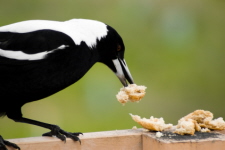 I love the singing of this beautiful Australian bird, I'll often go out the back in the mornings and sit just to listen to the magpies singing, they gather in the big trees outside my house and make a beautiful "good morning" chorus.

When we lived in Queensland one crashed into the back of our house and injured itself. My partner, Troy, rescued him and nicknamed him Mick (Mick the Magpie, original hey!) he had an injured wing so Troy looked after him for a few weeks until the wing was healed and we then took him to a bird sanctuary.

I must say that our boys didn't really like Mick, they were young and he was fairly aggressive towards everyone except Troy, but nevertheless they were happy Dad had saved Mick the Magpie.

They have a long breeding season, which varies, in different parts of the country.

Between two and five eggs are usually laid and the female is normally the one to incubate them for about 20 days, both parents then care for the young

They have a bit of a reputation as being aggressive because when they are nesting if they feel threatened by anything or anyone they can swoop from behind and snap their beaks trying to drive the threat away but they do this to chase away the intruder in an effort to protect their young. 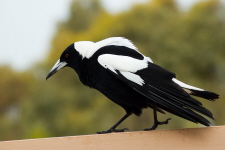 To avoid being attacked by a swooping Magpie it is best to stay away from the areas where they have their nests during the nesting season or if you have to go near them wear a hat or place your sunglasses on the back of your head because they normally swoop from behind and the sunglasses will make them think you are looking at them and if they think you are looking at them they probably won't swoop you.

Warning signs are posted when it is "swooping season" in some areas.

The Magpie is one of Australia's most well known birds. It is found in all states and territories.

Although never "formally" proclaimed the South Australia Bird Emblem the White-backed Magpie or Piping Shrike is easily identified with the state as it appears on the SA State Flag, SA State Badge and SA Coat of Arms.

Go to next bird page: The King Parrot