There are lots of fun facts about Australia and this page covers some of those amusing and different things about Oz.

We find out different bits and pieces all the time and add them as we go, so check back every now and then for any new fun facts about Australia.

And there are more facts on our interesting facts about Australia page.


In the first few decades of the colony of Australia the majority of the population were convicts.

The last convicts were transported to Western Australia in 1868.

Our first police force was made up of 12 of the best behaved convicts, one of the first fun facts about Australia

It was estimated in 2007 that 22 per cent of Australians had a convict ancestor.

During a chapel service in 1832 about 300 female convicts at the Cascade Female Factory mooned the Governor of Tasmania. Apparently the ladies in the Governor's party couldn't control their laughter. Now that's one of the fun facts about Australia.

But Australia was the second country in the world to give women the vote: The First.... New Zealand; good on the Kiwi's

Australia's greatest folk hero was a bushranger
named Ned Kelly who was born in June 1855 in Victoria, the eldest of 8 children of John (Red) Kelly and Ellen Kelly (Quinn).

Ned was first arrested 1869 when he was 14 and then again about a year later on suspicion of being an accomplice of a bushranger but even though all of the charges were eventually dismissed it was too late for Ned because the Police had him in their sights.

Ned was finally captured at Glenrowan, Victoria in 1880 (all the rest of the gang members were killed) and hanged at the Melbourne Gaol (jail) on the 11th November 1880 where his last words were "Such is life"....

You gotta love that!

You can read more about him and the Kelly gang on our Ned Kelly page.

When the Sydney Harbour Bridge was opened in March 1932 a retired cavalry officer named Francis De Groot was part of the honour guard and as the ribbon was about to be cut he galloped his horse forward and cut the ribbon with his sword.

The Sydney Harbour Bridge is affectionately known as the Coathanger.

I'm not sure if a lot of people would class this as one of the fun facts about Australia but it's certainly interesting. The first European settlers in Australia apparently drank more alcohol per head of population than any other people in the history of mankind. 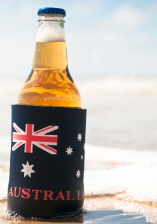 Fun facts about Australia even extend to our politicians.

One of our former Prime Ministers Bob Hawke was in the Guinness Book of World Records In 1954 because he drank 2.5 pints of beer in 11 seconds ......Mind you it was before he became Prime Minister.... but we probably wouldn't have cared anyway.

Another one of our politicians Sir John Robertson who was five time Premier of New South Wales drank a pint of rum every morning for 35 years. He was known to have said: 'none of the men who have left footprints in this country have been cold water men.'

Prime Minister Harold Holt went for a swim in 1967 near Portsea in Victoria and disappeared, never to be seen again.

Included in fun facts about Australia is the different sense of humour most Australian people have.

Because of that sense of humour when the Governor General was obviously drunk at the opening of the Sydney Olympics in 2000 and he pronounced Sydney "Sa-sa-Sydney" and then knocked the microphone, far from being ashamed or concerned, most of us (including me) just found it funny and laughed about how he could get a job as a rapper if he got sacked for being pissed on the job.

Fun facts about Australia has to include our fascination with Big Things.

Phew..... and the list goes on. There is estimated to be about 165 Big Things in Australia.

If you would like to see the Top Ten Big Things in Australia just watch the video below and have a laugh..... with us or at us, we don't mind!!


Another one of the fun facts about Australia is along with our fascination with Big Things we also love unique, some people might call them crazy, sporting events including some of the most unusual races found anywhere in the world.

And many more; some of which I've gone into more detail about below.

Held in the Northern Territory with proceeds going to the Lions Club for their various local charities is the annual Darwin Beer Can Regatta. Held at Mindil Beach all the "boats" are made from used beer cans..... or if the kids want to be a part of the fun they can make their vessels out of soft drink cans... the "boats" are then "raced" in the shallows with hilarious consequences.

The Henley on Todd Regatta or The Todd River Race is a another unique and hilarious "boat" race that is held annually in the dry sandy bed of the Todd River in Alice Springs with the proceeds going to selected humanitarian projects. The race started in 1962 as a bit of a joke aimed at the famous boating regatta called Henley-on-Thames held between Oxford and Cambridge Universities in England.

Every July Alice Springs in the Northern Territory holds The Alice Springs Camel Cup. The first Camel Race was run in 1970 and started out as a bet between two Alice Springs mates but has since grown to be an entertaining fun yearly event with all the proceeds from the day going to the Lions Club to be distributed to local charities.

The Compass Cup is called Australia's only cow race and has been held every year since 1974 in Mount Compass South Australia. The rider who stays on the longest is the winner and because cows can be stubborn and unpredictable this is not easy sometimes. The event raises money for charity.

Another one of the fun facts about Australia is Australians often use opposites to describe people like a redhead is called "Blue" or "Bluey", a bald bloke will be called "Curly", a tall man will be called "Shorty", a silent fella will be nicknamed "Rowdy' and bastard is often used as a term of endearment. You can check out our Australian Slang page for more on the unique Aussie speech.

In 2005 the Australian Government decided that the security guards in Parliament House in Canberra, ACT were banned from calling politicians and members of the public "mate'. The ridiculous ban was lifted after only 24 hours ..... A lot of Australian people use "mate" without even thinking about it.

Besides Athens in Greece the largest Greek population in the world can be found in Melbourne Victoria.

Australia's favourite breakfast spread is Vegemite, which is made from leftover brewers' yeast extract. Vegemite is almost black in colour and tastes very salty. Most people that are not from Australia find it hard to believe that we love it as much as we do .... but like most Australian people I couldn't get by without good old Vegemite on my toast in the mornings!

A thong in Australia refers to rubber footwear and not a pair of tiny bum less knickers as it does America.

In 1932 the Australian Military declared 'war' on the emu population of Western Australia and embarrassingly lost the fight. The amount of emus were out of control at the time and so farmers asked for assistance and the military were sent in, but it didn't work out the way they had planned because the emus proved to be quite resourceful in evading the troops and the bullets, they gave up after 2 attempts..... He can't fly but I'm telling you he can run the pants off a kangaroo and, obviously, soldiers & bullets.

There are many more sheep in Australia than people; about 10 sheep for every person. But we still give New Zealanders heaps (a hard time) about their sheep.

The Australian Lyre bird is the greatest imitator in the world.

The purple-necked Rock Wallaby found in northwest Queensland secretes a dye that can change the colour of it's face and neck to a range between light pink and dark purple.

When the English first saw a specimen of Platypus they believed the Australians were playing a joke on them by sewing the bill of a duck onto a rat.

The Australian Wombat has square poos that they use to mark the boundaries of their territory.

If you've enjoyed the fun facts about Australia and you want some more laughs check out our Australian humour page.