In this section we'll cover some of the more unusual and interesting facts about Australia.

The name Australia comes from the Latin Australis which means "of the South" Legends of "Terra Australis Incognita" an "unknown land of the south" date back to Roman times.

With an average of 330 metres Australia is the lowest continent in the world.

The Australian Snowy Mountains receive more snowfall in a year than the Swiss Alps.

Australia is the only continent without an active volcano; now there's one of the interesting facts about Australia that we're all pretty happy about!

The only land locked state or territory in Australia is the Australian Capital Territory.

It is thought that Aboriginals have called Australia home for between 40,000 and 80,000 years.

It is estimated that at the time of British settlement there was about 300,000 Aboriginal people who spoke around 250 languages.

British settlers aboard the 11 ships of the First Fleet arrived in Botany Bay in 1788 but moved north to Port Jackson (Sydney Cove) a few days later when they found the Botany Bay site unsuitable. They arrived at Port Jackson on the 26th January 1788 (now Australia Day).

The number of convicts transported to Australia was about 162,000; they were transported in 806 ships.

About 98-99% of the convicts sent here were from England, Wales, Ireland and Scotland but some were sent from other British colonies like Canada and India, while others came from New Zealand, Hong Kong the Caribbean and other countries.

A lot of soldiers were also transported here for crimes like mutiny and desertion.

The Transportation of British convicts to Australia ended in 1868.

Australian are generally law abiding people but one of our greatest legends is Ned Kelly, a bushranger, law breaker, killer and leader of the notorious Kelly gang of the late 1800's; you can read more about Ned and his gang on our Ned Kelly page. 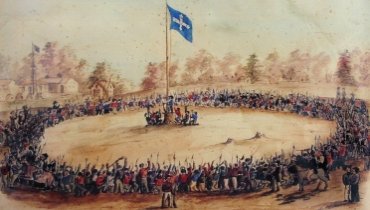 Unusual and interesting facts about Australia include Australia's only armed rebellion, the "Eureka Stockade" took place in the Ballarat Goldfields in 1854. The goldfield workers (known as 'diggers') were opposed to the government miners' licences. The rebellion became a significant event in the reforming of unfair laws, the developing of democracy in Australia, and the formation of the Australian identity and a fundamental principle of Aussie 'mateship'. The Anzac soldiers of World War 1 went on to adopt the term 'diggers' and our soldiers have been known as 'diggers' since.

Burke and Wills were the first white explorers to cross Australia from South to North. They left Melbourne in August 1860 and reached the Gulf of Carpentaria in Queensland in February 1861. They both perished near Cooper's Creek on the return journey.


Another of the interesting facts about Australia is these days there are about 115 people in gaol (jail) in Australia per 100,000 of population. In the USA it is about 715, Russia is about 585, New Zealand is about 160, Japan is about 54 and Canada is about the same as Australia at 116.

Women were given the right to vote in Australia in 1902.

The first female Member of Parliament in Australia was Edith Cowan who was elected to the Western Australia Legislative Assembly in 1921.

The Sydney Harbour Bridge was opened in 1932 and is the widest steel arch bridge in the world.

The design for the Sydney Opera House was chosen after the New South Wales Government conducted a competition in the late 1950's. Danish Architect Jorn Utzon's vision was the winning design. Unfortuanetely in 1966 Jorn Utzon resigned from the project because of disagreements with the Government. The building was completed in 1973 and Queen Elizabeth II officially opened it in that year. Jorn Utzon died in 2008 without ever returning to Sydney to see in person the amazing Opera House he designed.

The Honey Suckle Creek Tracking Station near Canberra broadcast the pictures of man's first steps on the moon to the rest of the world in 1969.

Interesting facts about Australia include the longest straight stretches of road, railway track and the longest fence in the world.

The longest section of straight railway track in the world at 478 kilometres crosses The Nullarbor Plain ( South Australia to Western Australia).

The longest straight section of road at 146 kilometres is also on the Nullarbor Plains.

The longest fence in the world is known as The Dingo Fence, Wild Dog Fence or Border Fence depending on which state you are in. 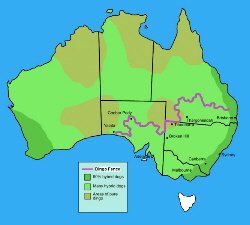 The fence is approximately 5,400 kilometres long starting at Jimbour in Queensland and continuing on to the Great Australian Bight in South Australia.

My father was a Boundary Rider on the New South Wales/Queensland section of the fence at Camerons Corner when I was a kid.

The largest cattle station in the world is Anna Creek Station in South Australia at over 34,000 square kilometres. It is 8 times bigger than the biggest ranch in Texas, USA and bigger than the country of Belgium.

The Melbourne Cup is a horse race that was first run in 1861 and is still held every year on the first Tuesday in November. It is dubbed "the race that stops a nation".... The state of Victoria gets a public holiday for it and now there's talk about the rest of us having one too because pretty much wherever you are in Oz when that race runs your looking at a television or listening to the radio to ride your horse home with the jockey!

Australians spend the most money on gambling in comparison to any other country in the world. Australia has twenty percent of the poker machines in the world

Quite a few of the interesting facts about Australia has to do with our unique and sometimes deadly wildlife.

The Kangaroo and the Emu were chosen to feature on the Australian Coat of Arms because they are incapable of walking backwards and therefore symbolise a nation moving forward.

Australia is home to six of the top ten deadliest snakes in the world.

The Australian Fierce Snake which is found around Haddons corner (this is where South Australia, Queensland and the Northern Territory meet) is the most poisonous snake in the world; the venom from 1 bite is enough to kill about 100 people! But despite this it has never killed anyone probably because it lives in such an isolated region. 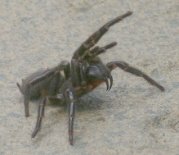 The Sydney Funnel-web spider is considered the deadliest spider in the world.

The stonefish is the most poisonous fish in the world and lives mainly above the tropic of Capricorn off the coast of Australia.

The Box Jellyfish is considered the world's most venomous marine creature and have killed more people in Australia than stonefish, sharks and crocodiles combined.

One of the interesting facts about Australia that a lot of people may not know is the largest number of wild dromedary (they have the one hump) camels in the world are found right here.

The Australian platypus and echidna are the only mammals (monotremes) to lay eggs. 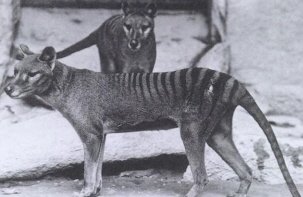 The last Thylacine (Tasmanian tiger) died in 1936 at the zoo in the capital city of Hobart, Tasmania.

Australia's tropical north or the top end is home to the world's largest saltwater crocodile.


Go to next facts page: Fun Facts about Australia